17 Pa-breds sell at Keeneland Yearling Sale that saw record $8..2 million for a filly

LEXINGTON, Ky.--The marathon Keeneland Yearling Sale Sept. 9-22 saw a record price of $8.2 million for an American Pharoah filly and an average price of $126,096, 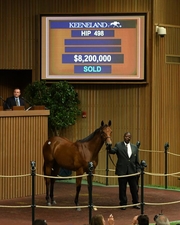 Keeneland Hip 498, an American Pharoah filly out of Leslie's Lady, set a record price at $8.2 millionOf the 24 Pa-bred yearlings that went through the ring, 12 in the first 10 sessions sold for an average of $71,333.

The sale was divided into 13 sessions, arranged in six books, starting with the top yearlings in book one and dropping down with each successive book.

Seven Pa-breds did not reach their reserve, and the total average price for the 17 sold was $54,000.

The get of Union Rags sold well, with a bay filly by Union Rags who is a half-sister to graded stakes winner Point of Honor, by Curlin, getting the action started early on day two of Book 1, selling for an even $1 million to Godolphin.

A filly by Triple Crown winner and leading freshman sire American Pharoah and out of Broodmare of the Year Leslie's Lady sold for $8.2 million, surpassing the $4.4 million Shadwell paid for Moon's Whisper in 2000 as the highest price for a yearling filly at Keeneland.

MANDY POPE, who breeds and races as Whisper Hill Farm, purchased the sale-leading filly, who is a half-sister to four-time Eclipse Award heroine Beholder, G1 winner and leading sire Into Mischief and globe-trotting G1 winner Mendelssohn. 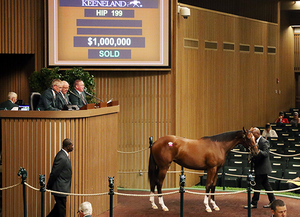 Union Rags filly sells for $1 millionFive of the seven-figure lots went to the international Godolphin operation of Dubai ruler Sheikh Mohammed al-Maktoum, who was in attendance at the sale for the second consecutive year, after not attending for several years.

Godolphin purchased a total of 10 horses, including a Union Rags filly, for $16 million in the last three days, leading all Book 1 buyers by gross.

"You heard rumors that Sheikh Mohammed was coming here, and you can’t be more excited for when he does show up," bloodstock agent Jacob West said. "That man changes people’s lives in the sales ring and he carries this sale. He has an incredible presence here. And as an American, I’m just excited that he is over here supporting us."

However, Pope prevailed when the star filly came to the auction ring. The early action was fast and furious, with the bid board lighting at $2 million less than 30 seconds in, with bids coming from various points in the sale pavilion and in the back holding ring.

"It's not your turn yet," auctioneer Justin Holmberg admonished at one point as two bids were called out simultaneously.

As other bidders dropped out, the action slowed to a deliberate pace as Godolphin's bloodstock advisers, standing in the back holding ring with Sheikh Mohammed looking on, and Pope, seated inside with adviser Todd Quast, locked in a final duel.

Pope and Godolphin's Anthony Stroud began raising their bids in increments of $200,000 and $300,000, hoping to land the knockout blow.

In the back of the ring, Stroud and others in the group discussed the final figures before walking away about 30 seconds later, leaving the gavel to fall.

The filly was in the ring about six minutes, all told.

"It was a very tough battle, a big battle," said Pope, who said she had predicted the price to be in the $4 million range. "I was persevering. Quast was trying to hold my hand down - he was getting pretty adamant about it. But I'm getting older; I'm getting to the final phases of what I'm going to do with my life, and this is what I want to do. I have lots to look forward to.

"She's the only thing in the sale I really wanted," Pope, 64, said. "So this is probably going to put me out of shopping in November. I think I pretty much blew through my broodmare budget."

Pope said the filly will head to Florida this fall for her early training, and said that she has not yet considered a racetrack trainer for her for next year.

"She's got a lot more pedigree than some of them, but she doesn't have the race record yet," Pope said. "So we've got a lot of racing to do. ... She's perfectly balanced, she's gorgeous, not too big, not too small. She certainly has tremendous value should she not make it to the races, for whatever reason. Like everything else, it's a big gamble."

ROBUST bidding activity – led by a record-priced $8.2 million filly by Triple Crown winner and leading freshman sire American Pharoah and out of Broodmare of the Year Leslie's Lady – helped the auction conclude its 13-session run on Sunday afternoon with some of the best figures in its history.

"It's been very hard to buy, extremely tough to buy – but wonderful for the horse business," bloodstock agent Marette Farrell said. "There are so many different entities here. Three months ago, we were all worried about the horse business, if it was going to survive – and now here we are in September, and I'm thrilled."

The Keeneland September yearling sale finished with 2,855 yearlings sold over 13 sessions, arranged in six books, for total gross revenues of $360,004,700, the fifth-highest figure in the sale's 76-year history.

This is the third year in a row that the September sale's gross finished above the $300 million milestone.

The September sale's average price finished at $126,096, a slight drop of 3 percent from the record mark of $129,331 established last year, but still high enough to finish second all-time.