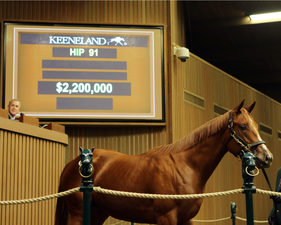 $ 2.2 million American Pharoah coltIt didn’t take long for the fireworks to start in earnest at the Keeneland September sale.

On Monday afternoon, Sept. 10, Hip 91, a son of Triple Crown hero American Pharoah, brought a final bid of $2.2 million from Godolphin, who beat Team Coolmore for the colt.

Bred by Hn R Nothhaft Horseracing and consigned by Woods Edge Farm, the chestnut is out of the Indian Charlie mare stakes-winning and graded-placed Kindle, who is a half-sister to Tonopah (Rock Hard Ten), a Group 3 winner in Australia.

This is the extended family of French champion juvenile filly Play It Safe (Ire).

The highly anticipated first crop of yearlings by 2015 Triple Crown winner and Horse of the Year American Pharoah, who won the 2015 G1 Breeders’ Cup Classic at Keeneland to close his career, and the participation of Sheikh Mohammed Bin Rashid Al Maktoum’s Godolphin highlighted Monday’s opening session of the 2018 Keeneland September Yearling Sale.

Godolphin paid $2.2 million for a colt by American Pharoah to top the session and record the highest price for a thoroughbred sold at public auction in North America to date this year.

BUT IT didn't take long for that record to fall. 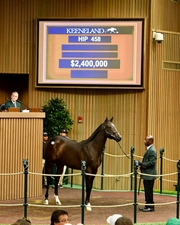 Hip 458, 2.4 Million War Front ColtA colt by War Front from the family of Hall of Famer Rags to Riches became the most expensive thoroughbred yearling to sell anywhere in the world to date this year when he commanded $2.4 million from Coolmore's M.V. Magnier during Tuesday's second session of the Keeneland Yearling Sale.

War Front also sired the day's top-priced filly, a half-sister to champion and G1 Kentucky Derby winner Nyquist, sold for $1.75 million, and a colt from the family of Irish highweights Yesterday (Ire) and Quarter Moon (Ire).

Robust competition for Thoroughbred racing prospects among a global contingent of buyers continued Wednesday during the third session of the Keeneland Sale, where a colt from the first crop of 2015 Triple Crown winner American Pharoah brought $1.4 million and six other yearlings sold for more than $1 million each.

The seven million-dollar sales increased the total number of yearlings sold for seven figures or more through the first three days of the 2018 September Sale to 20, eclipsing last year’s total of 13 for the entire auction and marking the highest number since 2007.

A total of 34 Pa-breds went through the ring at Keeneland with seven selling for over the sale average of $129,335 and nine not reaching their reserves.

The Pa-bred sale topper was hip 49, a colt by Into Mischief out of Katherine'skadence, by Mr. Greeley, bred by Smart Angle LLP and bought by Godolphin for $875,000.

A filly bred by Michael Moran, hip 1498 by Quality Road out of Midnight Ramble, by Unbridled's Song, was bought for $390,000 by Royal Oak Farm (Damian & Braxron Lynch), Agent.

Three sold for $150,000; hip 560, a filly by Ghostzapper out of Villete, by Petionville bred by Jon A. Marshall and bought by Four Star Sales; hip 1427, a colt by Fed Biz out of Icee Sara, by Eskimo bred by Jill D. Doyle and bought by James B. Keogh (Grovendale) Agent; and hip 1565, a colt by Super Saver out of Return the Jewel, by Broken Vow, bred by Blackstone Farm and bought by Stonehaven Steadings.

The 27 individuals that sold for $1 million or more were more than twice the 13 such sales a year ago and the highest since the 32 at this level, also in 2007.