WELLINGTON, Fla--Victoria Colvin on El Primero won the $50,000 USHJA International Hunter Derby, the final leg of not only this year’s Deeridge Derby, but also the 2019 Palm Beach Masters Series® at Deeridge Farms. 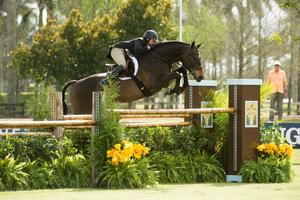 Victoria Colvin and El Primero were the Overall Champions of the $50,000 USHJA International Hunter Derby at the Deeridge Derby (Photo by Kathy Russell Photography)The top 25 entries from the 42 that contested Saturday’s Classic Round returned for Sunday’s handy over the Phil DeVita-designed course.

Colvin and El Primero were the last to ride based on their leading performance in Saturday’s Classic Round.

With Saturday’s scores combined with Sunday’s handy points, plus credit for jumping the high options, the duo amassed an overall score of 378.75.

That gave them the win by a mere 1.25 points after Tracy Fenney on MTM Outbid put the pressure on with an exceptional handy round worth 199 points.

That pair finished on a 377.50 total to finish in the runner-up position, while Kelley Farmer on Enchanted was third with a 372.75 total score.

“After the first round yesterday, I could barely get El Primero going for the victory gallop, but today he had great energy,” said Colvin. “He jumped better than ever. He jumped so high at the first jump that I was waiting for him to come down. I had an unfortunate swap at the second jump, and after that I decided that I needed to be really handy, and I made the inside cut to the trot fence even though I had not planned to do that, but it all worked out.”

FENNEY AND MTM Outbid moved up from fourth position after the classic round to claim runner-up honors.

Fenney knew she had to take risks in order to reap any rewards, and it paid off.

“I had quite a bit to make up from yesterday,” said Fenney. “I figured I had nothing to lose, so I just gave it my all. I was super happy with my horse today.”

Enchanted, ridden by Kelley Farmer, also moved up in the final rankings, jumping from fifth position after the first round to a final third overall after scoring a 195 in the Handy.

“We, as exhibitors, are so grateful to the Jacobs family for putting on a show like this,” said Farmer. “The horses love the change of venue and the ability to show on the grass. It is so special, and the horses respond in a positive way.”

Deeridge Derby president Katie Jacobs Robinson, who co-founded the Palm Beach Masters Series with her brothers Lou and Charlie Jacobs, expressed her pride in how the competition played out.

"Hosting a derby like this has always been a dream of ours,” she said. “My father and I have always had a passion for hunters, and it makes us so happy to welcome these hunters and give them a chance to compete in a stand-alone show in a ring like this. We really appreciate their being here.”