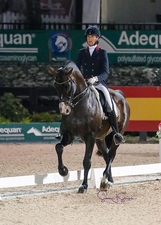 Charlotte Jorst on Kastels Nintendo (Photo by Susan Stickle)Jorst on Kastel’s Nintendo scored of 72.447 percent for the win, and, with her performances at the Festival, Jorst accomplished her reason for coming east from her hometown of Reno, Nev., - she was named to the U.S. team for the Nations Cup to be held on March 13-14.

“I thought the whole canter program was just really, really lovely," said Jorst. "He was so relaxed, and he came back for every half halt and all the changes were beautiful. The piaffe and two pirouettes were great, and the changes in between. That whole thing just felt tremendous."

“Today I rode more forward, because I thought my whole trot program was a little too conservative on Thursday in the qualifier for the special,” said Jorst. “I decided to just give it a little more, and give more in the short sides and just sort of show him off in a better way. I think I succeeded with that. I think that was that extra couple of points.”

“He’s always my best pal, and I know I can trust him 100 percent," said Jorst of Nintendo. "He goes and goes and goes for me. We’ve been so many places together and done so many things. We’re best friends, and the trust and the camaraderie between us is what I like the best.”

U.S. EQUESTRIAN named the following combinations to The Dutta Corp. U.S. Dressage Team and the U.S. CDIO-U25 Team for the Nations Cup.

Team competition will be held March 13-14 during the Global Dressage Festival.

The jog will take place on March 12 and competition will get underway on March 13 as newly appointed Chef d'Equipe and Technical Advisor Debbie McDonald leads the U.S. contingent on home soil.

US Equestrian has named the following combinations to the U.S. team:

US Equestrian named the following combinations to the CDIO-U25 team:

The competition will be streamed live on the USEF Network.