WELLINGTON, Fla.--Laura Chapot of Neshanic Station, N.J., rode Chandon Blue to another win, this time in the $36,000 EF Challenge Cup Round 10 CSI 3* on Thursday, March 14, at the Winter Equestrian Festival. 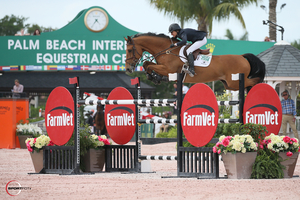 Laura Chapot and Chandon Blue (photo by Sportfot)Thursday’s featured Challenge Cup had 85 contesting the first-round track set by Canada’s Michel Vaillancourt before the field was narrowed to 19 for the jump-off, and, of those 19, six elected to save their horses for another day, having already secured their places in Saturday’s $134,000 Grand Prix CSI 3*.

With 13 horses still in the jump-off, the early riders went for speed, but they all had rails down, as the fast pace kept any of the first nine riders from jumping double clear.

Turning in the fastest four-fault time of those nine was Amanda Derbyshire of Great Britain on Roulette BH, who finished in 38.74.

So Chapot’s goal was a quick and clear round, but not one that required an all-out speed effort, which is just what she delivered, stopping the clock in a clear 39.21 seconds to ultimately take the win.

TWO OF the remaining riders, Zoe Conter of Belgium and Georgina Bloomberg, also went for clean rounds, and second went to Conter on Davidoff de Lassus, with a time of 40.48 seconds, and giving Bloomberg on Manodie II H third with a time of 45.81 seconds.

“When you have so many in the jump-off, you really think it’s going to be very, very fast,” said Chapot, who has had the ride on Chandon Blue, owned by Mary Chapot, for the last year and who also claimed victory with the 14-year-old Oldenburg gelding by Chacco Blue x Landcapitol in the $50,000 Dutta Corp./Guido Klatte Grand Prix CSI 2* during WEF 7.

“People were going extremely fast at the cost of a rail,” said Chapot. “I maybe didn’t put in the fastest jump-off ever, but my horse jumped great. It just seems like Chandon Blue jumps better and better every time I ride him. It feels like he has a lot of ability, and he always tries his heart out. We fortunately had a good clear round. I didn’t take any risks to the last jump, and fortunately, it held up!

“I had planned one less stride from one to two,” said Chapot. “He ended up jumping so high over the first jump, it was going to be a real run to make one less stride. I know he’s a quick horse anyway, so I figured I could be really neat and jump clear. He gets across the ground very quickly. So, it wasn’t so much about the number of strides through the first part of the course, it was making sure that you jumped all the jumps clean and not leaving too much open for the rest of the competitors.”