WELLINGTON, Fla.--Ailish Cunniffe of South Salem, N.Y., finished in fifth aboard Baloucento 2, in the $50,000 Under 25 Grand Prix Final at the Winter Equestrian Festial, but she was leading the Under 25 Grand Prix Series coming into Sunday’s Final and with that placing held on to secure the overall title. 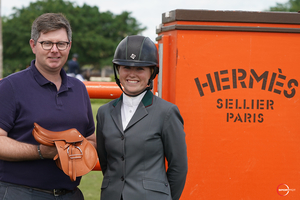 James Sardelli, Senior Equestrian Account Executive, Hermès, and Ailish Cunniffe. (Photo by Sportfot)“I’ve been competing in this series for five years now and it’s always been a goal of mine to win overall,” said 21-year-old Cunniffe, who had one rail down in 42.17 seconds.. “I’ve always been taught that consistency is key, so being consistent and doing the same program, trying not to let the nerves get to you especially on days like today is important. I have a really special horse who loves all atmospheres, so I’m really lucky to have him.”

For her overall win, Cunniffe was presented with a Hermès mini saddle, a $10,000 store credit to Hermès, as well as an invitation to compete in Europe with transportation provided by The Dutta Corp. in association with Guido Klatte.

“We’re so lucky to have sponsors to support this amazing event, and without them we would all not be here and wouldn’t get these amazing experiences in the field, under the lights, and in the team events,” said Cunniffe. “These are experiences that will definitely help us when we are under pressure later in our careers.”

Germany’s Olaf Petersen, Jr. designed a two-round course for 30 challengers in the eighth and final event of the Series.

Coyle, going last in the jump-ff, finished in a blistering 39.83 seconds to bump Belgium’s Zoe Conter into second.

“This is my last year in the Under 25 and I think the series has been incredible for me,” said Coyle, 24, who started competing in the Under 25 Grand Prix Series four years ago. “Experiencing this format is a real help for when we’re older.”

Coyle got the ride on CHS Krooze, a 9-year-old Irish Sport Horse mare in December after bringing the mount over from Ireland.

“I didn’t expect her to be at this level already and that just proves that the Under 25 is a real good series for the horses as well," said Coyle.