RAEFORD, N.C.--Buck Davidson of Unionville, Pa., rode Carlevo to win the Advanced division at the Carolina International CCI and Horse Trials on March 24. 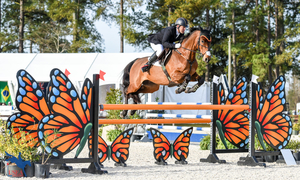 Buck Davidson and Carlevo (Photo by Leslie Mintz) Davidson was second in dressage on a score of 27.5 behind Allison Springer's 27.2 on Business Ben, and he stayed second after the Cross Country, but this time behind Waylon Roberts on Lancaster.

Davidson was the last to go in the show jumping , and all he needed to do to win was to leave all the rails up.

A few rails were rattled, but none came down so Carlevo, the 12-year-old Holsteiner gelding owned by Carlevo LLC, won the division.

Davidson has Carlevo entered in the Kentucky Three-Day Event, where he finished in 20th place last year, but his owner is also interested in taking him to Europe so Luhmuhlen may be the plan instead.

MATTHEW FLYNN of Potomac, Md., added 1.6 time penalties in the show jumping, but still moved up from third after cross country to finish second with Wizzerd.

The cross country phase had resulted in quite a bit of movement on the leader board.

Of the 18 pairs to complete the Advanced cross-country only one made the time on Ian Stark’s track.

A lot of time penalties resulted in a leader board shuffle, and Roberts took advantage to move up from fourth on Lancaster.

“As usual, Ian sets a big, inviting track,” said Roberts. “You walk around it and makes you open your eyes up, but I think that helps you ride it better. I thought the footing was really exceptional for standing up to all of the horses they had this weekend, and Lancaster was super around there. I am really pleased.”

Roberts owned Lancaster as a 4-year-old, but sold him to Boyd Martin in 2012.

In 2016, the Koppins bought Lancaster and gave the ride back to Roberts who is now aiming him at the Kentucky Three-Day Event this spring.

Matthew Flynn moved up from fifth to third with Wizzerd.