WELLINGTON, Fla.--McLain Ward rode HH Azur to win the $500,000 Grand Prix on March 30 in an exciting eight horse jump-off that kept spectators on the edge of their seats. 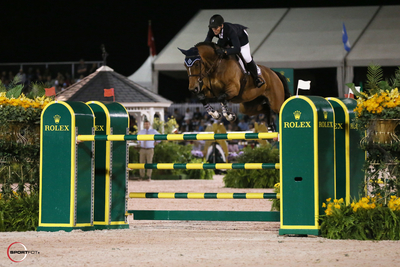 McLain Ward and HH Azur (Photo by Sportfot)The final grand prix was the highlight of the 2019 Winter Equestrian Festival, ending a 12-week circuit of top jumper, hunter, and equitation competition that awarded more than $9 million in prize money.

The final grand prix boasted a field of 40 entries that included some of the best horses and riders in the world competing over a course set by 2016 Rio Olympic Games designer Guilherme Jorge of Brazil.

Eight of the 40 went clean, and the first in the jump-off was David Blake of Ireland riding Keoki who set the pace at 44.36 seconds with a steady clear round, good enough for fifth at the conclusion of the class.

The winning time was lowered with the next horse, H5 Quintol, ridden by Eduardo Menezes of Brazil who, despite a hard rub at the second to last vertical, stayed clear in 39.69 seconds to eventually finish fourth.

Next in was 19-year-old Lucy Deslauriers riding Hester.

WITH AN impressive early rollback to the vertical and a quick pace through the remainder of the jump-off, they shaved four-tenths of a second off the leading time to finish in 39.25 seconds for third place.

In her first class of the week on Wednesday, Deslauriers had a fall in the 1.45m class, but with her usual determination, she bounced back for a solid finish on Thursday to qualify for the Grand Prix.

“I think at the beginning of the week I was definitely a little out of practice mentally without being in the ring for a few weeks,” said Deslauriers, who is a freshman at University of Pennsylvania. “I really tried to just regroup. I came back and jumped the WEF Challenge Cup, and the horse felt great. I knew it was up to me to stay out of his way coming into tonight. I really tried to stick to the plan, do everything I could, and I knew he’d be right there with me. I’m thrilled.”

While Deslauriers has won a five-star class before, she said, “Unquestionably, this is one of the top, if not the top, moment. I think not only as prestigious as this class is, but to be sitting next to these two (McLain Ward and Kent Farrington) for sure.”

To the delight of the crowd, the rounds kept getting faster and faster.

Kent Farrington on Gazelle started off with a blazing gallop and never let up, streaming through the timers in 37.82 seconds, but he would have to wait for thelastfour entries to see if this time would hold up. 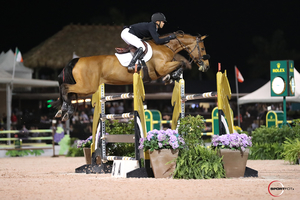 Kent Farrington and Gazelle (Photo by Sportfot)“McLain and I are great competitors, and we’re friends," said Farrington. "I know if he’s coming at the end of the class, it’s going to take everything usually to win. He’s on one of his best horses, and it’s one of the best horses in the world. I tried to go as fast as I could go without being completely reckless. Azur has a bigger stride, so I thought on my rollbacks, I did the maximum that that horse could do. I think today’s jump-off suited a bigger-strided horse, but it was very close at the end. He had a tremendous round. I think it was an unbelievable effort from him and his horse. Unfortunately, we ended up second today.”

Daniel Bluman of Israel on Ladriano Z went next, but had a rail at the vertical to finish on four faults in 39.09 seconds for sixth.

With an unfortunate fall at the second to last fence in the jump-off, Laura Kraut on Confu was eliminated and finished eighth.

Next in was Rodrigo Lambre of Brazil riding Velini, bit with a rail down over the oxer, he would have four faults in 40.15 seconds for seventh.

It all came down to the final rider to see who would win, and with three wins in this final grand prix over the 12-year history of the class Ward was certainly stiff competition.

Using HH Azur’s massive stride and incredible talent, Ward, after adding a stride in the final rollback, pushed to the final oxer and sped through the timers in 37.42 seconds to take the win over Farrington by four-tenths of a second.

“The jump-off set up well for my horse," said Ward. "I have a bigger stride than Kent’s horse has, and I knew I could do six strides from two to three. I thought I could cut back on the double maybe a bit faster. The rollback didn’t show up, I was losing to the left, and I had to add one and kind of was dealing cards. I figured there was nothing to lose. The last oxer looked far away about six or seven strides out, but she covered it beautifully. Let’s be honest, it was a half an inch. It was great sport. Sometimes Kent is in this seat, and sometimes, I’m in that seat. It goes both ways.”

It was a great return to the top for the HH Azur, who is owned by Double H Farm, François Mathy, and Ward.

A slight injury kept her from competing at the World Equestrian Games in Tryon last year, and since then Ward and his team have worked to return her to her winning ways.

“I’m really excited for Azur and all of her owners,” said Ward of the 13-year-old Belgian Sport Horse mare by Thunder van de Zuuthoeve x Sir Lui. “It’s been a long road back since she was injured last summer. Obviously, she’s one of the best horses in the world, and her not being fit and healthy for the WEG was a huge disappointment to everybody involved with her. It’s a real testament to Tim Ober, our vet; Mikey Boylan and Lee McKeever and his team, who really brought this mare back to top sport."

“Coming back this winter, we’ve had a little bit of four fault-itis,” he said. “I thought she jumped really great in the five-star a few weeks ago here and had kind of a funny rail down. Then I made a mistake in California in the $1 Million Grand Prix. So, it was nice to put it together. I think she’s been in good form, but finally I put it together to not make a mistake. It was great for everybody involved.”