GOTHENBURG, Sweden--Beezie Madden on Breitling LS won the first class of the World Cup Final in show jumping, the speed competiton, but dropped to fourth after the second class, while Laura Graves on Verdades placed second in the Dressage Grand Prix 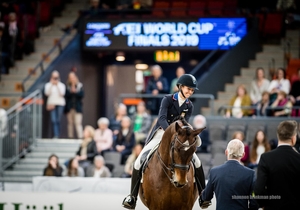 Laura Graves on Verdades (Photo by Shannon Brinkman)In the dressage competition, all three combinations placing in the top eight in the FEI Dressage World Cup Final Grand Prix on March 5.

Laura Graves and Verdades led the way for the U.S., placing second on 80.109 percent closely behind Germany’s Isabel Werth.

Graves of Geneva, Fla., and her own and Curt Maes’s 17-year-old Dutch Warmblood gelding found their rhythm in the large Scandinavium Arena in front of a knowledgeable Swedish audience.

“He was super rideable today,” said Graves. “I think tomorrow will be an interesting competition for everyone, and, hopefully, my horse gives me the same great feeling that he did today. I feel really, really confident in how we have prepared him for this competition.”

GERMANY'S Isabell Werth  steered her Weihegold OLD, to victory in the Grand Prix, but the World No. 1 rider, and the most decorated athlete in the history of equestrian sport, is taking nothing for granted as she chases down her third consecutive, and fifth overall, World Cup title.

"I can feel the breeze on the back of my neck," said Werth, after the World No. 2 combination of America’s Laura Graves and Verdades slotted into second place on a day when US riders were highly impressive.

“I’m incredibly hungry to be at the top of the podium and I’ll do my very best tomorrow.," said Graves. "I know there is a real chance, I believe in this horse - he’s 17 but in the best shape ever!”

Giving the Swedish audience their first look at the U.S. dressage combinations at this Dressage World Cup Final, Perry-Glass put in a nearly flawless test.

With beautiful canter work, the combination finished in fourth place on a score of 77.267 percent.

The 12-year-old Hanoverian stallion proved his spot among the final contenders, earning a 75.326 percent and the eighth-place tie with the Netherland’s Hans Peter Minderhoud.

“It is an exciting thing for us,” said Graves. “We are all under 35 years old, and I think that is really exciting for us as Americans. To have three young women who have brought along these horses, and really have the drive and motivation to keep doing it with other horses for this team, that is exciting for us. I am really proud of every ride that we have put forward, and to be really stamping our American training on these horses.”

THE SECOND round of the Jumping World Cup Final saw a shift in the leaderboard, and Madden and Breitling LS, who had led after the first speed class, despite jumping a commanding and nearly flawless round, placed fifth in the class and fourth overall. 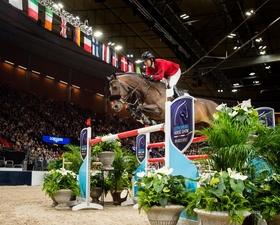 Beezie Madden om Breitling LS (Photo by Shannon Brinkman)After jumping a clear round on a time of 76.41 seconds, Madden of Cazenovia, N.Y., and Abigail Wexner’s 13-year-old Dutch Warmblood stallion headed into the jump-off with seven other top combinations.

Their jump-off time of 34.75 seconds was the fastest of the round but a rail at the final jump cost them the double-clear.

Sitting on just three penalties, and tied for fourth with Belgium’s Niels Bruynseelsand Olivier Philippaerts, as well as Switzerland’s Martin Fuchs, Madden and Breitling LS sit less than one rail from the current leader headed into Sunday’s final.

“Breitling felt great in the warm-up and felt great going in. I have a horse that is on his game,” said Madden. “We had a little touch at the first fence, and I think after that he kicked into gear and was amazing. I think this is one of the more difficult second phases I’ve seen. Yesterday was a little bigger than normal, and today was quite difficult – big and technical. I was tense; we need to do a little catching up, so this is good for me, so fun!”

All five of the U.S. combinations improved upon their Round I positions and will move into Sunday’s final phase of competition.

They jumped an almost perfect second round and will head into Sunday with 17 penalties.

Additionally, in their World Cup Final debut, Kelli Cruciotti of Elizabeth, Colo., and Hadja van Orshof, her 12-year-old Belgian Warmblood mare, put in another solid round to advance their position from 19th to 18th and a total of 15 penalties.