DEVON, Pa.--Susan Tice-Grossmann's Rotiyas, by Rosenthal out  of Touch of Class, who was handled by Richard Taylor won the Best Young Horse, selected from the ribbon winners of the in-hand classes throughout the day on Sunday, June 2. 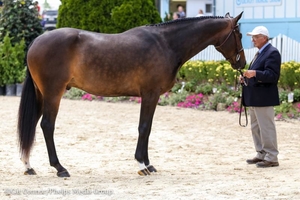 Rotiyas was the winner of the 3-Year-Old Other Than Thoroughbred - Stallions and Geldings class earlier in the day and left a lasting impression on the judges to ultimately be named Best Young Horse.

"What makes this horse so special is his temperament," said Taylor. "He wants to be a show horse. He's a lovely horse to show. He's kind and quiet, and the Grossmanns do a wonderful job. He looks like he is going to be very good. He's pretty far along undersaddle so he could be a Young Hunter undersaddle horse at the Sally Wheeler competition, and he'll jump some little jumps this summer and fall. He seems to want to do what you ask him to do relative to his work schedule."

"I HAVE BEEN showing horses for several years for the Grossmanns, and they have a group of very nice horses made up from a group that are somewhat related to each other," said Taylor. "They continue to buy young horses, raise them, show them in-hand and break them. They are wonderful people to have horses for. When you have a group of horses as nice as their group, you're lucky. Like I always say, they do much of their own work at home on the farm. It makes it a really good group of people to work for. I am extremely lucky to have them as customers and to have access to those kind of horses to show for those kind of people." 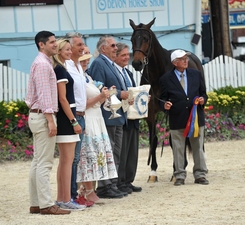 Richard Tylor, right, handles the Best Young Horse for sixth year (Photo by Alix Coleman)"Winning at Devon, to me, should be a lifetime achievement for anyone," said Taylor. "If they don't think that's the case, they're missing the boat. This is six in a row for me, and that's all I can say. Those six horses have wanted to be show horses."

The Leading Handler Award was presented to the handler who accrued the most points, based on ribbons won, throughout eligible classes during Sunday's competition.

Emily Anne Belin ,who handled Caberneigh, by Cabardino N out of Special, owned by Linda Mancini, to top finishes throughout the day, won the Top Handler award.