BROMONT, Canada--Boyd Marti of Cochranville, Pa., had an impressive weekend at the Bromont Three Day Event, June 6 - 9, placing first and third in the CCI4* and also winning tthe CCI3*, beating over 150 competitors representing six nations at the Bromont Olympic Equestrian Park in the rolling hills of Bromont, Quebec. 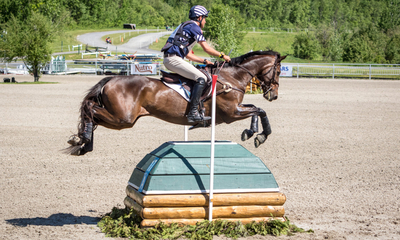 Boyd Martin on Ray Price (photo by Cealy Tetley)Martin place first on Ray Price and third with On Cue in the CCI4*.

Martin bought Ray Price's grandmother from Olympian Heath Ryan when he lived in Australia, bred his mom, Fair Fiona W, to Raise a Stanza and the resulting offspring was Ray Price, who he brought over from Australia at the age of 3.

Now 11, Ray Price is owned by the Ray Price Syndicate.

In the CCI3*-S, Martin also came out on top, this time on Barry, named for his breeder, the Canadian eventer, Peter Barry.

Barry is a 10-year-old thoroughbred cross owned by the rider and Windurra, LLC and is the offspring of Peter Barry's mare June and the British stallion, Catherston Liberator.

FOLLOWING the cross-country on Saturday for the top class, the CCI4*-L, it was Martin in first and second.

Martin's first to go, On Cue, a 14-year-old Selle Francais mare by Cabri de Elle out of On High, added just 1.6 time penalties to finish the day with a score of 32.30 and hold on to her second place position.

Martin's second mount, Ray Price, was in fourth heading into cross-country, but took over the top spot with one of only two double clear rounds and sat just 0.10 points ahead of his stablemate.

“He’s a lightning fast horse," said Martin of Ray Price. "He’s a work in progress. He’s obviously a favorite of mine as I bred him in Australia and rode his mother and grandmother.”

“He did not give me the best feel at Jersey Fresh, and my coach, Phillip Dutton, gave me three or four good cross-country schooling sessions and it made an incredible difference,” said Martin.

Fifteen of the 24 starters ran into trouble on Derek di Grazia's cross-country course, but all the riders and horses walked away safely.

In show jumping, Martin was clean on Ray Price but added .80 time faults to finish first with 33.00 faults and then had four faults on On Cue to finish third on 36.30 behind Laure Kieffer on Landmark's Monte Carlo, who finished on her dressage score of 35.40.

Buck Davidson of Unionville, Pa. was fourth on Carlevo with a score of 40.30

"The show jump is not about making your horse careful, it's about making him confident and jump with joy," said Martin.

Dr. Kevin Keane on Sportsfield Candy added 5.20 time faults on cross country to his dressage score of 29.20 and than added four faults in show jumping to finish second with 34.40 faults.

Martin placed the Bromont CCI up there as equal with the best and even went to on to say that "it makes Boekelo and Jersey look like a Pony Club track."

Alyssa Phillips of Coatesville, Pa., won the CCI3*-L U25 section.

Dressage leader in the CCI3*-L U25 section, Phillips, added just 1.6 time penalties to finish cross-country on a score of 27.3 with Oskar.

This allowed her one rail going into Sunday jumping ahead of Alexandra Baugh and Ballingowan Pizazz who sat in second with a score of 33.2.

Phillips, who is originally from Texas, rides with top rider, Jennie Brannigan in Coatesville.

Of the cross-country, Phillips said, "It went really well, I'd had a lot of input from the other girls on the team

Phillips, leading start to finish, completed on a score of 27.30. for the win

Speaking about Oskar, Phillips said, "he jumped super, he was a great boy all weekend".