LAKE PLACID, N.Y.--Laura Chapot continued her winning streak, riding Out of Ireland to win the $20,000 1.40m Open Stake at the Lake Placid Horse Shows on June 29. 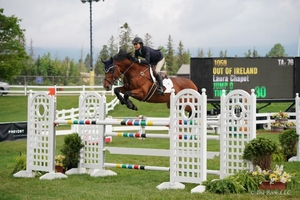 Laura Chapot on Out of Ireland (Photo by The Book LLC)Chapot of Neshanic Station, N.J., who has won at least one class in the Grand Prix ring each day, also placed second on Calafornia and fourth on Shooting Star.

For the first three days at Lake Placid, it has been a Kevin Babington and Chapot tour de force.

Between the two of them, they have won every open jumper class.

Only 7 of 28 entries reached the jump-off by going clean over the 14-effort, first-round course designed by Eric Hasbrouck.

Chapot, riding Calafornia, was the second to try the seven-jump tiebreaker course, and she took an early lead when she finished clean in 33.169 seconds.

That lead held till the end of the class when Chapot returned on Out of Ireland and finished clean in 32.398 seconds.

TWO-TIME Olympic Silver medalist and Show Jumping Hall of Famer Anne Kursinski of Frenchtown, N.J., was the only rider to join Chapot in the top four.

She finished third with a clean jump-off ride in 33.430 seconds on UK.

Walker, the 2018 ASPCA Maclay National Champion, turned in two fault-free rides and the fastest jump-off time of 27.745 seconds to win on Cohbanta.