Mario and Lucy Deslauriers finish first and second in the $300,000 Grand Prix at the Hampton Classic

BRIDGEHAMPTON, N.Y.--Canada’s Olympic and World Cup veteran, Mario Deslauriers, riding Bardolina, won the $300,000 Grand Prix at the Hampton Classic on Sept. 1, but what made this win even more special was that his daughter, Lucy, finished second. 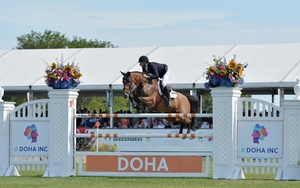 Mario Deslauriers (Photo by Shawn McMillan)The Deslauriers family had extra celebrating to do after this particular Hampton Classic.

Lisa Deslauriers, who is Mario's wife and the mother of Lucy, a past Grand Prix and USET competitor, is Chairman of the Board of the Hampton Classic.

Mario’s daughter, Lucy, who just returned from being part of the U.S. bronze-medal winning team at the Pan American Games, had a stellar week at the Classic.

She followed a win on Friday in the $75,000 Grand Prix Qualifier with her second-place finish in Sunday’s marquee event.

BUT IN THAT Friday class, one of the sport's most popular riders suffered a devastating accident when his horse fell over the second fence of a combination.

The equestrian community has rallied around the Babington family and started a fundraising effort to help with Kevin’s medical expenses.

Anyone interested in supporting this effort can make a donation on Facebook at Sissy's Medical Fundraiser for Kevin Babington https://www.facebook.com/donate/508000833102520/2806644266031223/ or at https://www.gofundme.com/f/for-kevin-babington-and-family.

"Kevin is one of the most beloved riders on our horse show circuit, and we are all pulling for him. We remain hopeful of a complete recovery,” said Shanette Barth Cohen, the horse show’s Executive Director "I do want to commend the first responders on the scene. They reacted quickly and handled the situation professionally."

FOR THE Grand Prix, course designer Michel Vaillancourt built a challenging course at the maximum height of 1.60m, including a triple combination which took the competitors nearly the entire length of the packed VIP tent.

The tough course was a true test of ability, resulting in just three of 39 combinations progressing to a jump-off round.

The start order for the class was determined by the final placings in Friday’s $75,000 Grand Prix Qualifier, which meant the better you did Friday, the later in the order you went on Sunday.

Lucy Deslauriers had the luxury of being the final rider to go in the jump-off while Devin Ryan, team gold medalist from the 2018 World Equestrian Games, on his WEG mount Eddie Blue went first, sandwiching Mario Deslauriers in the middle. 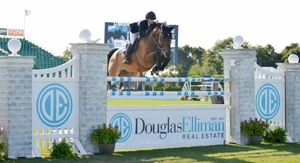 Lucy Deslauriers (Photo by Shawn McMillan)The jump-off course consisted of eight efforts, in a series of S-curves across the ring from side to side, and a long gallop down to the last fence headed toward the in-gate.

Ryan misjudged the striding to the second fence and Eddie Blue had it down, but he was able to hold it to just the four faults, crossing the timers in 42.66 seconds.

Next to go, Mario Deslauriers executed a masterful pivot turn with Bardolina from the third fence in front of the VIP tents, to cross in front of the open water, then across the field to the Hermès oxer at fence four to finish clean in 42.82 seconds.

Last to go, Lucy, 20, also took the inside turn with long-time partner Hester, and with his effortless galloping stride they easily had the best time, finishing in 39.60, but she pulled the top rail on the final fence, to finish second on a score of four faults.

“I got a little excited,” said Deslauriers. “If I had it to do over again, I would have pulled a little harder to the last fence.”

“Lucy won on Friday so today was my turn," said Mario. "Seriously, she and Hester make a great pair, and I know they are very quick. I did what I had to do to put a little pressure on her.”

IRELAND'S Shane Sweetnam won the $30,000 Longines Rider Challenge as the Classic's leading open jumper rider for the third time in the seven years the Classic has presented the award.

Sweetnam received a Longines watch and a check for $30,000.

Sweetnam also received a Longines watch for winning Saturday’s $72,000 Cup, and since he won four Longines watches at the Hampton Classic in 2018, he was asked who were the lucky recipients of all of his watches?

His answer (very smartly) was: “My mother is next in line!”
Shane Sweetnam winner of the $30,000 Longines Rider Challenge (c) Shawn McMillen

The Grand Prix field has been newly-renovated and rebuilt after the $1 million dollar investment from the Hampton Classic.

“Allen Rheinheimer and the committee did an incredible job,” said Vaillancourt. “The foundation is solid, and the grass needs maybe one or two years to mature perfectly, but it’s really on the right track. The horses jumped incredibly well all week. In a year or two, this venue will have some of the top footing in the world as far as grass is concerned.”

“It felt like jumping on a tumbling mat," said Olympic silver medalist Peter Leone. "There was life and spring to it, it was just so exciting to ride on a field like that!”

“It was perfect," said two-time Olympic gold medalist McLain Ward. "Absolutely spot on. Not a single blade of grass was out of place.”

THE OPEN Jumper division began with the $30,000 Jumper Challenge, and team gold medalist from WEG 2018, Adrienne Sternlicht, won on Fantast with Molly Ashe-Cawley second with Berdien, and third went to Geoffrey Hesslink with HH Casey Jones.

Ward of Brewster, NY, finished on top in section A with a new mount Silberrose, so new that this was their first time in the competition ring together.

Ward had to settle for second in section B with Up Des Chaines, behind his 2018 WEG gold medal teammate Sternlicht, again riding Fantast.

Due to inclement weather Wednesday afternoon, the start of the FEI division was postponed to Thursday morning.

Goutal-Marteau raved about how the footing held up so well following Wednesday’s rain.

“I jumped on Sunday in the first big class and the ground felt amazing – we turned and burned and were able to go very fast. Yesterday I watched a video on the Hampton Classic’s Instagram account of the amount of water the new drainage system was pulling off this field, after inches of rain, and today you would barely know it. You hear it a tiny bit as you’re on course that it’s a little wet, but you can still go fast, you can turn and nobody’s slipping. After more than 50 horses in this class there’s barely a mark on the field.”

In Thursday’s $40,000 FEI Speed Stake, Brazil’s Luiz de Azevedo rode Collin to victory, a horse he had rescued from slaughter five years ago, with Catherine Tyree finishing second and third with her pair of greys, BEC Lorenzo and Catungee, with times of 66.39 and 66.76 seconds respectively.

With Friday’s win and consistent results in Tuesday and Wednesday’s classes, Birdsall and Maestro Van Het Binnenveld were Champions in the 7 & Under Jumper division, and Reserve went to Goutal-Marteu and Goodwill V/D Coefering.

Sweetnam, who won the class in 2017 and 2018, won this year with Kirschwasser SCF in a time of 39.16 seconds with Catherine Tyree and BEC Lorenzo just three one-hundredths off the lead in 39.19 seconds, and Sternlicht finished just behind on Toulago in 39.25 seconds.

The $10,000 Equitation Championship was won by Ava Ellis of Annapolis, Md., after two phases of testing, and second went to the 2018 winner, Mimi Gochman of New York, N.Y.