Photo essay of winners at Dressage at Devon

September 26, 2019 (Devon, PA) - The USDF Finals, Championships and Materiale Classes filled both the Dixon and Wheeler rings for most of the day. As the Breed Show wrapped up, happy winners went home with blue ribbons. 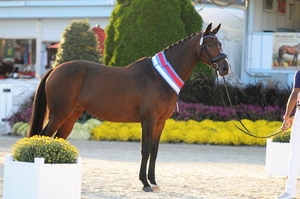 USDFBC Filly Final - Gjenganger, a chestnut mare, owned by Alice Tarjan of Loxahatchee, Florida with a score of 84.563. Gjenganger had a great day on Wednesday as well, taking home multiple blue ribbons.

USDFBC Colt/Gelding Final - Newport Jazz WRF (Everdale x Zippidy DO Dah WRF), a dark bay KWPN one year old, bred by Judy Reggio of Windy Ridge Farm (Bethel, PA), with a score of 83.288 - another familiar name for those who were at DaD on Tuesday and Wednesday. 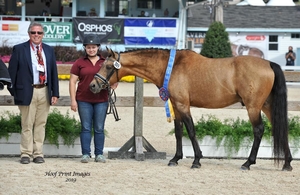 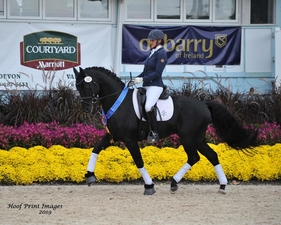 Fellini CFUSDFBC 5 YO Materiale Championship - Flying Colors, ridden by Olivia Steidle, with a score of 81.550.

At all International shows , including Dressage at Devon, the jog is part of the FEI Vet Check. The purpose of this check is to properly identify your horse and be sure that he is sound enough to compete. It is an important step in the process and led to the beginning of the Performance Division.

The division began with the USEF Fourth Level Test of Choice, won by Harmonium (CAN), ridden by Brittany Fraser-Beaulieu with a score of 70.834.

USEF YH Test for 5 Year Olds – Final – The impressive high score of 88.400 was achieved by Jida Selly A (Finland), ridden by Merita Hagren. 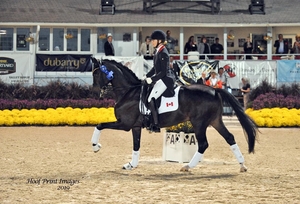 What HappenThey were followed by the FEI Prix St Georges for Amateur CDIAm, won by Heather Mendiburu on What Happen, an 18-year old bay mare.

FEI Grand Prix CDI3* (Qualifier for Class 512 GPS) was won by Jacqueline Brooks (Cedar Valley, ON) on Westwood 5 by Wolkenstein II out of Lindenbluete) a 17-hand, 12-year old, chestnut gelding.

They’ll all be part of the Grand Prix Special on Saturday night!

The last (but not least) class of the night was the FEI Grand Prix CDIW (Qualifier for the Grand Prix Freestyle).

An Arab breeding winner (Photo by Ali Coleman)Taking the blue, with a score of 71.587 was Lindsay Kellock from Canada on Sebastien, by Sandro Hit out of Feirie Dame, a 13-year old Rhinelander gelding,

They were just off a win at Saugerties where the pair won the World Cup Grand Prix Freestyle in only the second Big Tour competition for the partners.

The red went to Brittany-Fraser-Beaulieu, also from Canada, on All In by Tango out of Leontine, a 14 year old, 17.3 hand chestnut KWPN gelding, bred by H. Verstraten.