U.S. Jumping Team 12 in Nations Cup Final round one, relegated to Challenge Cup

BARCELONA, Spain--The U.S. Jumping Team finished a disappointing 12th in the first round of the Jumping Nations Cup Final on Thursday, Oct. 3 and will now compete on Saturday, Oct. 5 in the Nations Cup Final Challenge Cup, the class for those who failed to make the top eight. 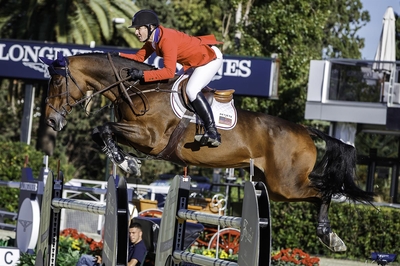 Spooner of Agua Dulce, Calif., on Quirado RC, was the first U.S. rider in the Olympic Arena at the Real Club de Polo de Barcelona for the team, which drew 10th out of 18 nations in the class order.

Spooner and Quirado RC, a 10-year-old Hanoverian gelding, had 13 faults.

“EVE WAS phenomenal." said Ridland. "Her ride was great. For a 21-year-old rider to basically do two championships in one year, coming out of the Pan American Games with a bronze medal and the momentum that created, it’s given her a really strong year, and we have to take that as a positive coming out of today.” 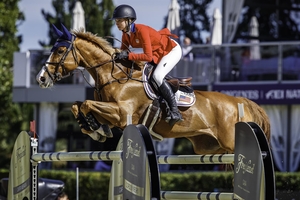 Eve JobsKraut of Royal Palm Beach, Fla., on Fleurette, a 10-year-old Selle Francais mare, had 12 faults, while Ward of Brewster, N.Y., on HH Azur, a 13-year-old Belgian Warmblood mare, served as the anchor pair and finished with just a single time fault.

“McLain’s mare jumped great, as we expected." said Ridland. "As for Richard’s horse and Laura’s mare, it was unexpected. They both are a little bit new to this, and it was a tough course. It was one of those unexpected days and that can be a killer when you have some rounds like that together in the first round. Everyone has their ‘A’ team here, and there’s Olympic qualification on the line for seven teams, so it didn’t take much to create the situation that we’re in.”

“We’ve stuck to what our plan has been all along, and it can get bumpy when you do that, but it’s the right thing to do," said Ridland, who has had great success in partnering young riders with veterans to increase the depth of U.S. teams. "There are definitely some positives to take away from today. We’re dealing with young riders and young horses. Laura’s mare has tremendous talent and Richard’s horse is in the same situation. Richard was hoping for a better round, as we all were, but we have to remember that we wouldn’t be here if it wasn’t for that horse’s four clear rounds in qualifying. Every once in a while you have to put up with a day that just doesn’t quite work out the way you want it to. The course was tough, but very fair. It was a great competition and we have to just move on.”

He said that when there are disappointing days, it’s imperative to elevate the positives, which was Jobs’ performance in the highly pressurized environment of the FEI Nations Cup Final.