Ava Stearns wins the Maclay Championship at The National

LEXINGTON, Ky.--Ava Stearns, 18 of Chilmark, Mass., won the ASPCA Maclay National Championship in her final junior year over a starting field of 175 competitors at The National Horse Show on Nov. 3. 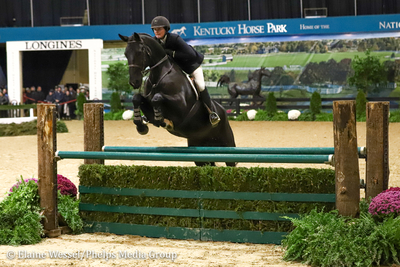 Ava StearnsCourse designer Bobby Murphy’s 14 effort course featured a diverse collection of fence types ranging from sturdy to airy, with the majority of the jumps not implementing standards, and was a nod to popular obstacles of the past as Murphy incorporated a series of fences that were reminiscent of those seen in previous generations.

There was a forward 5-stride line, a collected 6-stride line, two in-and-outs and an obstacle jumped twice in both directions.

Judges Jimmy Torano and Tamara Provost ranked Stearns, 92nd to go, at the top of the standby list following the first phase of competition.

IN THE under saddle phase, riders were judged on lengthening of stride, flying changes and changes of gait, most of which was done without stirrups. 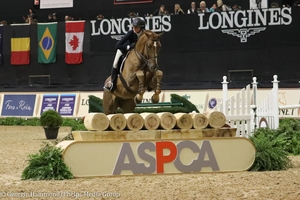 Charlise CasasBreanna Bunevacz and Emma Fletcher moved into first and second after the under saddle phase, ahead of the final over fences phase.

With the points too close to make a decision after the second jumping phase, the judges requested a final test for six riders, which included highest-placed Stearns, Fletcher, Charlise Casas, Hannah Hoch, Sophie Gochman and Elli Yeager.

For their final ride-off, competitors were asked to canter directly to fence one, counter-canter fence 11, canter fences 12a and 12b, canter to fence 13 in six strides, halt, canter fence eight, hand gallop fence five and exit at the walk.

The first five partnerships each turned in solid performances with no major errors, keeping the competition tight.

Stearns on Acer K, last to go, rode a precise round in correct form to win the championship.

Though their partnership is relatively new, Stearns and Acer K have already achieved an incredible amount of success together, earning the reserve champion honors in both the 2019 Platinum Performance/USEFShow Jumping Talent Search Finals – East as well as 2019 Washington International Horse Show Equitation Final.

As the trainers of the winning rider, Missy Clark and John Brennan of North Run were also awarded a one-year lease of an Audi.

“I could not think of a better way to go out," said Stearns. "I was so lucky to have the support of North Run and everyone in this fall season. It would not have been possible without them. It was really exciting to come back from last week and have another strong finals finish.”

“I was very excited when I came and saw the course this morning," she said. "I thought it was very well done, interesting, challenging and the jumps were all beautiful. I really appreciated that it asked the same questions off both leads, I thought it was a course that would be very technical to ride, which ended up being correct. I would say that the whole thing was enjoyable, and I really liked the opportunity to show the technical side of things but also to be able to get up and show a little bit more of the skills that you hone in at the end of the year in the test.”

“I started seriously working with Acer K at the beginning of the summer," said Stearns. "He is probably the smartest horse I have ever had the opportunity to ride in my life. He is only 8 years old, and he just started doing the equitation in March. He could not have impressed me more. He walked into every final and never put a foot wrong. He brought his ‘A’ game every single time and never let me down. I always knew I could rely on him, and he took all the new things we threw at him in stride. I could not be more thankful to have the opportunity to work with him.”

“I started the equitation at the end of WEF this year, and over the summer I really struggled with the transition from the jumper ring to the equitation actually, and it was hard to find the finesse and the right balance," said Casas. "With repetition and going back and forth between jumpers and equitation I found myself relaxing, so from last night to today I just worked on getting on and feeling the horse.”

“I didn’t have my first best round, but I knew that if I worked hard I could come back from it," said Yeager. "Through the flat, I was flatting my butt off ,and I ended up moving up. In the second round and then the work-off I wanted to move up just as much to end strong and not finish on a silly mistake or anything that I could control. I just really went for it. I knew that I could do it with my horse.”

“Ava has been such a hard worker for so long ,and she has really earned her moment here," said her trainer Missy Clark. "She has worked with us for seven years and has ridden anything and everything that we have put underneath her. The horse that she has been riding this fall, Acer K, has never done the finals before and is only 8 years old so the whole thing is incredibly impressive to me. In my mind nobody deserves it more.”

“It was a great class," said judge Jimmy Torano." Ava came in the first round and had a super round and in the second round, there was probably no one that noticed, but there had been some lighting changing in the ring, and it was trying to make a couple of little mistakes. Tammy and I really felt that they were not riding errors but that she dug in and got it done. For sure her horse was a little on guard, and she really rode, and when she came back in for the final work-off she pulled out all the stops and nailed it. For me, the work-off was a clear cut winner. I have to say that all of the riders in the work-off got up out of the saddle and hand galloped! That was why we did the work-off the way we did, giving them the longest possible approach to that last jump because we really wanted to see the riders hand gallop.”