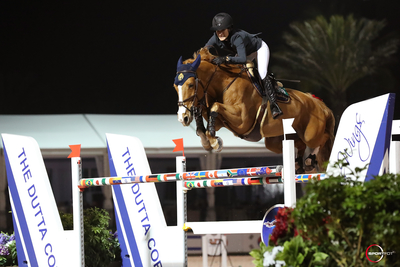 From a starting field of 37, nine horses advanced to the tie-breaker over tracks set by course designer Ana Catalina “Catsy” Cruz Harrisof Mexico.

With only one to follow behind her, Springsteen wowed the crowd by taking over the lead by less than one-hundredth of a second in 36.04 seconds.

“I THOUGHT I would still try to go fast in case I knocked one down because she’s such a fast mare,” said Springsteen. “I thought I had fence one down and got really distracted, but she jumped amazing. I’m really lucky to have her, she’s such a talented mare, and she really tried her heart out tonight.”

Springsteen has had Volage du Val Henry since the mare was 8.

“In the beginning, she was a little bit difficult; she had a tricky mouth, and it took me some time to get to know her,” said Springsteen. “Things really clicked this fall, and she’s just been jumping unbelievable – clear round after clear round. She’s so consistent, and I can really rely on her. She’s careful, but she has a lot of heart and always tries so hard to win.”

Springsteen is in the middle of a WEF season marked with consistent top finishes, a highpoint on her road to the short list for the Olympic Games in Tokyo.

“My dream is always to represent the United States in championships, so I am definitely always working toward that. I feel like I have a really good group of horses jumping great right now, so I am hoping to make that short list. I will just keep doing my best.”

Cornacchia was a close second in her debut season at WEF., finishing in 36.13 seconds.

“This is actually my very first time in Florida,” said Cornacchiao of Calgary, AB. “So far I am loving it, and this was a great start! We felt like we had the horses and wanted to step it up a little bit this winter, so we decided to make the trip here. It’s just an amazing venue, the whole concept of this horse village is incredible.”

With the fastest four-fault jump-off round, Wolff and Casall placed third.

“I know him pretty well; we try to use him sparingly, but he still has a lot left in the tank,” Wolff said of the 15-year-old Holsteiner gelding. “I always have to go in riding my own ride, and he’s gotten quicker and quicker through the years.

COLVIN once again proved unbeatable as she rode her talented 2019 $100,000 Palm Beach Hunter Spectacular winner, Private Practice, to win the premier class of WCHR week for the second year in a row during “Saturday Night Lights”. 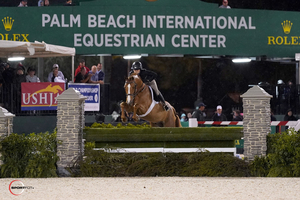 Victoria Colvin on Private Practice (Photo by Sportfot)Saturday night’s Hunter Spectacular is the highlight of WEF’s WCHR Hunter Week, which emphasizes the hunter discipline and gives junior, amateur, and professional hunter riders the chance to introduce their horses to the International Arena.

A field of 37, consisting of winners in the junior, amateur, and professional categories throughout the week, contested the round-one course designed by Patrick Rodes.

Out of the original starting line-up, the 12 pairs with the highest scores were invited to return for the second phase of the two-round classic style competition.

Both courses were offered at three heights, 3’6”, 3’9”, and 4”, and judging was split into three distinguished panels consisting of Rick Fancher and Phoebe Sheets in one panel, Mary Lisa Leffler and Mark Jungherr in another, and Lyman Whitehead with Chris Wynn for the third.

When all combinations had contested the first track, the class’ 2019 winners, Victoria Colvin and Private Practice, once again sat in the top position with an average score of 90.33.

Ten professionals, one junior, and one amateur made up the returning 12 entries.

Colvin held the lead from the time she entered the ring as the fifth to go until the time she closed the class, besting her own previous score from round one of 90.33 with an improved 91.83.

The victory was Colvin’s second in a row with Brad Wolf’s 10-year-old Holsteiner gelding and her stunning sixth Hunter Spectacular win since 2012.

“Private Practice is an amazing horse,” Colvin said. “He’s one of my favorite horses, and this class is a blast because we are able to ride under the lights and in the International Arena. They don’t host many hunter classes in this arena anymore so to be able to go back in this ring is a lot of fun.”

Katie Taylor moved up from the third position to second and was a strong contender for the top honor, but fell just short of Colvin after completing the second round with a total of 178.82 points.

“It’s incredible to be representing the west coast here tonight,” said Taylor. “ I received the e-mail a few months ago that I had qualified to come and do this, and I’ve always wanted to be a part of this class.

Third-place honors were awarded to veteran hunter professional Stewart on Private Life, with a total combined score of 177.82.

“I was really pleased with Private Life," said Stewart. "He hasn’t shown since the National Horse Show, and he had a month off after that so we had to get him fit again. Tonight, his best round was his final round, but he’s always very dependable, and he’s still fairly young so I’m excited to have him.”