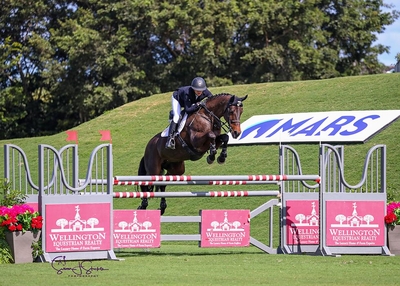 Marilyn Little on RF Scandalous (Photo by Susan Stickle)Little and RF Scandalous won the opening dressage phase with a score of 19.4 on Saturday and held it through Sunday’s show jumping and cross-country phases.

From a starting field of 40 horse and rider combinations, 33 advanced to the morning’s show jumping phase, held on the grass derby field.

Maintaining her lead from dressage, Little added four faults in the show jumping phase and stood on 23.4 penalties.

With a clear round in show jumping, Buck Davidson of Unionville,Pa., on Carlevo moved from fourth place to second and had 28.6 penalties going into cross-country. 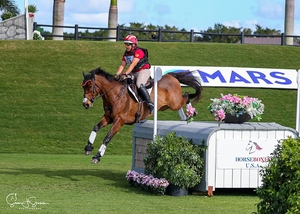 Buck Davidson on Carlevo on cross country (Photo by Susan Stickle)Heading into the cross-country phase, which was designed by Capt. Mark Phillips, 28 combinations contested the track that included a two-stride “triple-brush arrowhead” combination, a water feature and corners.

Dutton and Z had a clear round to finish with 28.70 penalties, which would give them third place at the conclusion of the class.

“I think it’s obviously very early in the season, but it’s great to get out in this atmosphere,” said Dutton. “Doing the five-star dressage test was an advantage for us."

“I tried to go give them a run without stretching them too much at this stage of the year,” Dutton said, talking about not only his mount Z, but his second horse Fernhill Singapore. “I was really pleased with both horses and tried to keep them well and not stretch them too much. I think they had a good experience.”

Another clear round came from Davidson and Carlevo, and their score of 28.60 held up for second. 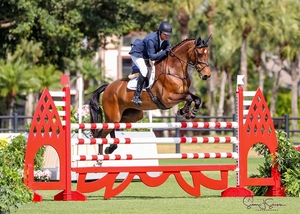 Phillip Dutton on Z (Photo by Susan Stickle)"Carlevo is certainly good at this stuff,” said Davidson. “Show jumping is getting better, and the owner and I sat down and thought about maybe selling him, but we figured he’d be good for these kinds of things. He’s a nice horse to have in the barn, and he’s a really sweet horse. He’s good in all three phases, and he was very good this weekend.”

Davidson felt that the MARS Eventing Showcase was “a fantastic opportunity” to prepare his horses early in their competition season, especially with a cross-country course that let the riders learn where their horses sit going into a big season of the five-star event in Kentucky in April and the Tokyo Olympic Games later this summer.

“I think it was fast enough without kind of going crazy,” Davidson said of the course. “It was a unique event that feels a little bit more like a cross-country school than it does a big competition. I think it is a good thing for the young horses to be able to get this atmosphere and deal with all the other things going on. Full credit to Mark Phillips and everybody here that put on a great show. The footing was perfect and it was a fun week.” 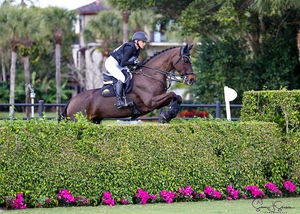 Marilyn Little on RF Scandalous on cross country (Photo by Susan Stickle)Little and RF Scandalous ended with 4.80 time penalties on the cross-country course, but despite that, her early lead gave her the buffer to hold onto the victory with a total of 28.20 penalties.

“I'm disappointed that the performance in the cross-country wasn't better, but this is a three-phase event, and she also did put in two wonderful performances,” said Little. “Although she did have a rail this morning in show jumping, the score wasn't indicative of the performance, because she's just come so far. To me, to know what she was dealing with out there on course, I have so much respect for her."

“I wish that this afternoon had gone better, and yet, in sports sometimes we have wonderful days. We deserve to have a great placing and it doesn't happen,” Little said. “I was disappointed in the performance this afternoon, but the horse still deserves all of the accolades and all of the credit because her heart was so huge. It was just a rough day out there. But she still came in and she still stood in the stall very proud of herself. That is what sports are about.”

It was a highly competitive class, with the top four finishers within one point of each other.

“I've been so blessed to have the ride on a horse that just goes out there, and she tries every time,” said Little of the 2005 Oldenburg mare by Carry Gold out of Richardia, by Lario owned by Jacqueline B. Mars and Phoebe and Michael Manders. “For me, in many ways, this is a hometown show. It's just really one of the greatest honors of my life to ride a horse for Mrs. Mars, who I think of as one of the greatest horsewomen this country has ever known and certainly one of the greatest sportsmen and supporters of our national program. I'm so grateful that Mars Equestrian took on the sponsorship here, because I do think it's an important event and a very meaningful one for me. I'm glad that Scandalous could be the winner of her event. It means a lot.”