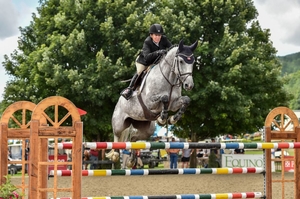 Marylisa Lefffler on Luminous (Photo by Andrew Ryback photography)Leffler and her winning mount, Luminous, were one of six entries to jump the first-round, Gerry Briggs-designed course clean to advance to the jump-off.

David Jennings of Franklin, Tenn., and Gracieux van Seven Oaks were the first in the jump-off, setting the clear-round time to beat at 46.22 seconds.

The next in the ring, Amy Masterson of Loretto, Ontario, and Bentley were also clear but in 49.33 seconds to place third.

Jennings’ time would hold up for second place, with only Leffler besting his time to win.

SHE AND Luminous, a 9-year-old warmblood mare owned by Rolling Acres, jumped clean in in 45.16 seconds to secure the win.

“She’s just been amazing, she is such a trier,” said Leffler, who got the mare in November 2017 and who is just returning to the show ring after injuring her shoulder in June. “I separated my acromioclavicular joint in my shoulder, so I didn’t do the inside turn back to fence three today. I’m still just a little cautious about over-doing it.”

“She’s so game,” said Leffler, who has been attending the Vermont Summer Festival for more than 20 years. “I left out the stride up the first line, and I thought, ‘Well, if I did that, I’ll go ahead and leave out in the next one too!’