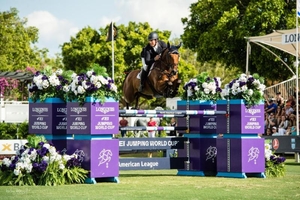 “It’s all just very surreal. It’s been an amazing week," said Granato. "It’s a privilege to get to ride at a venue like this and against riders like these whom I have looked up to for a long time. To have a week like this is amazing.”

The jump-off read like a who’s-who of international show jumping with Olympic veterans and FEI World Cup champions among the nine who jumped in the second round on the Alan Wade-designed course.

CONOR SWAIL of Ireland was the pathfinder in both rounds and rode the first clear in the jump-off in a time of 44.68 seconds on GK Coco Chanel, which resulted in fourth place.

Granato and Carlchen W shaved off nearly two seconds with a time of 42.70 to take the lead with a slew of stars yet to jump.

“I have a naturally fast horse, so for both classes I got to play that to my advantage and try to let him run at this pace and stay focused on my track and my turns,” said Granato. “I think I got lucky here and there with a rub in each jump-off, but the horse is very fresh. I’ve been gearing him towards this week and I think he came out really fresh and strong and ready for it.”

Olympic veteran Mario Deslauriers (of Canada, the 1984 FEI World Cup winner, on Bardolina came close with a jump-off clear round time of 43.48 for second place.

“My horse is at a point where she’s got to learn to go a little faster," said Deslaauriers. "She’s got a big stride so sometimes it’s a little more complicated to maneuver, but she’s learning to turn better. Today and even on Friday we tried to go a little faster to give her that experience and half a second faster today would have done it, but I was happy with the way she handled herself.”

Last to go was 2007 FEI World Cup Champion and Olympic veteran Beat Mändli of Switzerland, who raced around the course on Dsarie and was on track to take the win, but missed with 44.16 seconds for third place.

“It’s a beautiful venue," said Granato, "I can’t say enough nice things. They do a great job. It’s so great of them to open their facility for us to come over. It’s an energizer in the middle of the circuit (of the Winter Equestrian Festival)  for us as riders and for the horses to get to jump at this kind of venue.”

This is the fourth year for the Palm Beach Masters at Deeridge Farms and if the riders have any say, the series will continue for a long time.

“To see the level of competition here is extraordinary. That was the most gratifying to me that people plan their year and bring their best horses here,” said Lou Jacobs, series co-founder along with siblings Charlie Jacobs and Katie Robinson. “As a family the best times we’ve had have revolved around horses. It brings us closer together as a family. It’s a love that we all share and we’ve got some great memories. This is a special place for us. We’ve spent a lot of happy times here as a family. It’s wonderful now for me to enjoy it with my daughter and extended family. It’s been really very much a labor of love.”

ALSO ON SUNDAY, Katie Dinan rode Ulpi N De Brekka to victory in the $10,000 Gold Championship Grand Prix topping a ten-horse jump-off to win in a time of 34.772 seconds.

“I’m so happy with her. I jumped two classes with her this week, she was second on Friday and won today so she couldn’t have gone any better,” said Dinan. “It was a really fun week with her. She has so much quality, she gives everything at every jump. I think she really does it from her own heart and character. I knew that she wanted to win and I didn’t want to let her down. I’m really happy.”