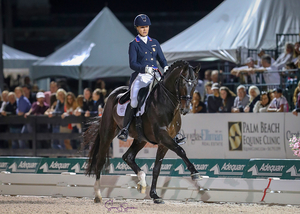 Adrienne Lyle and Salvino picked up their second win of the week in the Grand Prix Special.

“This is my first time I’ve ever done a special under the lights, so that was fun and different,” said Lyle. “It’s always a thrill riding under the lights here on Friday night at Global. I was so happy with Salvino. I’m so happy with his attitude. He’s just going out there, and he seems like he’s enjoying every minute of it.

“I JUST need to keep working on, as a rider, how to balance him and prepare him for every movement,” she said. “He’s a very athletic horse with a ton of scope, which is wonderful, but I need to learn how to keep it all even and exactly where I want it throughout the whole test. It’s been a really fun journey so far.”

Brittany Fraser-Beaulieu (of Canada) and All In, her 14-year-old KWPN gelding, won the  Grand Prix Freestyle CDI5* with a score of 76.520 percent.

“It’s very exciting, especially since this is probably going to be my last show until maybe September,” said Fraser-Beaulieu, who is expecting her first child in June. “I couldn’t ask for a better night honestly. He was with me the whole time, and it’s probably one of the best feelings I’ve had on him out there. To end on a note like that, I’m pretty happy.”

Katherine Bateson Chandler and Alcazar, a 14-year-old KWPN gelding owned by Jane Forbes Clark, earned a score of 75.705 percent to come in second in the freestyle.

“I’m thrilled with him. He hasn’t done a night class in quite a while,” said Bateson Chandler. “I’m super proud of him. This is the best freestyle we’ve done. He gave me an amazing feeling, and he helped me through the whole thing. We had a little spook in the beginning. It sort of woke me up, and it made me kick on and he was right there for me, so I couldn’t be happier.”

Third place went to Christoph Koschel of Germany and Ballentines 10, who earned a score of 73.780 percent in their first freestyle ever.

Earlier in the day Leida Collins-Strijk of the Netherland) and Romy, a 13-year-old Hanoverian mare owned by Arlene Page, won the FEI Prix St Georges CDI1*, presented by Iron Spring Farm, with a score of 71.814 percent.

Ashley Holzer and Valentine, her 9-year-old Oldenburg mare by Sir Donnerhall, earned a score of 72.882 percent to win the FEI Intermediate I CDI3*.

In the FEI Grand Prix CDI3* for Special,  Lyle and Harmony’s Duval, a 11-year-old Danish Warmblood gelding earned a score of 69.348 percent to win.

Jill Irving of Canada and Arthur, was second place with a score of 68.891 percent, and Susan Pape (of Great Britain and Harmony’s Don Noblesse earned a score of 68.896 percent to come in third.