MIDDLEBURG, Va.--Sloane Coles, a Grand Prix champion rider and all-conference collegiate lacrosse player, has been elected to the Foxcroft School Sports Hall of Fame,,  and the 2007 Foxcroft graduate will become the 11th member of Hall at an induction ceremony on Saturday, April 13 at the all-girls’ boarding and day school. 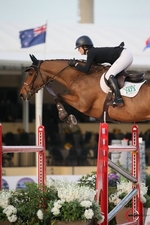 Sloane Coles Coles, who operates Spring Ledge LLC, a hunter/jumper training and teaching facility in The Plains, Va., was elected by a panel of eight voters that includes former and current Foxcroft athletic directors and coaches and alumnae, including two members of the Hall of Fame.

“Congratulations to Sloane on her election to the Foxcroft Sports Hall of Fame,” said Foxcroft Head of School Catherine S. McGehee. “I can't think of a more deserving candidate.”

Coles was surprised and delighted by her election.

“Cathy called me personally to let me know I was elected," said Coles. "I was definitely caught off guard, and I am truly honored to have even been considered for the Hall of Fame.”

Seldom has an athlete achieved such high standards in two such vastly different sports disciplines as riding and lacrosse.

During her senior year at Foxcroft, Coles was arguably the best junior equestrian in the country, winning the 2006 USA Equitation year-end rider award and the North American Equitation Championship.

SHE CONTINUED training through her four years at Drew University and afterwards, reaching the highest level of show jumping competition.

She competes regularly on the Grand Prix circuit and has won several events, including a Grand Prix on 2016 and the 2017 Grand Prix of Michigan.

All through high school and college, though, Coles managed to find the time to pursue another of her favorite sports — lacrosse. 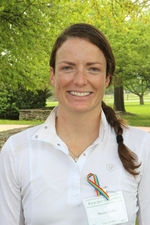 She played both years that she attended Foxcroft and was an all-conference selection in the tough Independent Schools League selection the School belonged to at the time.

At Drew University in Madison, N.J., the hard-working, athletic midfielder was a second-team All-Landmark Conference selection in 2008, when she also made the conference’s academic honor roll.

A year later, she was a first-team conference selection and made second-team regional all-American.

She also played for Team USA in the Southern Crosse Tournament in Australia where she helped her team win the gold medal.

Meanwhile, she continued working with a variety of top trainers, including John and Beezie Madden, Mark Leone, Belgian Olympian Francois Mathy and Lauren Hough before returning to The Plains in 2013 to open Spring Ledge LLC.

Athletes are selected to the Hall of Fame for a combination of outstanding competitive achievement, contribution to sports and personal character.

In order to qualify for the Hall, an athlete must have graduated from Foxcroft, been a varsity competitor or top-level rider and been out of school for at least 10 years.

She must have distinguished herself by her outstanding athletic achievement since graduation, as a player or coach, in college and/or beyond.

Athletes must serve as examples of outstanding character, courage and leadership which Foxcroft seeks to develop in its athletic program.