Kevin Babington was catastrophically injured in a fall at the Hampton Classic on Friday, Aug, 30 and remains unable to move in a hospital. 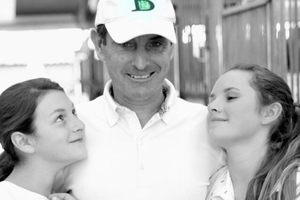 Kevin Babington with his two daughtersKathy Gilbert is among a group of people who have started a fundraiser for the Babingtons, as Kevin is a professional horseman without the means to pay for the huge medical bills this injury is incurring.

"This fundraiser is for our dear friends Kevin and Dianna (Flaherty) Babington and their teen aged daughters Gweneth and Marielle," said Gilbert. "Kevin, an accomplished Olympic equestrian, was competing at The Hamptons Classic on Friday and was thrown from a horse suffering catastrophic spinal cord injuries and is now unable to move. As you can imagine, the medical bills and family needs are already enormous. Kevin had no disability insurance and the family has no financial ability to even meet their immediate needs such as needing to stay near the hospital to be close to Kevin, and paying basic monthly bills as Kevin was the sole breadwinner.

Got to GoFundMe.com, and put in Help Kevin Babington Heal to donate.

"EARLIER the same day that he was injured, Kevin and Dianna had made sure that their Wellington Florida barn was opened up to accept all horses who were in need of shelter from Hurricane Dorian. These are kind people who selflessly did for others and now need our help. Kevin is a humble man of humble means, who rides for a living and has spent his entire life helping other people and animals.

"Even if you don’t know Dianna or Kevin, in honor of their giving spirit to people and animals that they didn’t know, keep them in your prayers, send them positive energy and please consider making a financial contribution to show them your love and help them pay the staggering medical costs as they navigate a long and uncertain road."

This campaign has been started by Kathy Gilbert and Kid Kelly, and we are working in coordination with Sissy Wickes' campaign on Facebook.

"Kevin's injury is to C3 and C4 which is extremely serious," said Gilbert. "He remains unable to move his limbs. While the prognosis is not promising, it is too early to tell anything for sure and the family still asks for your positive energy and prayers for a miracle.

"Today we worked hard to get Kevin off of the ventilator for periods of the day," said Diana Babington on Saturday, Sept. 7. "I promise you he is fighting like hell. He sustained hours of unassisted breathing before needing assistance again. His spirit was evident at times he was less sedated. Elizabeth Sponseller is with Marielle Babington tonight assisting him. He has at least one of us with him at all times. Please keep praying for recovery.

Kevin is out of surgery and is now in recovery," said Diana on Sept. 3. "The surgery went well. The vertebrae were fused and his neck is stabilized. He is out of the collar and breathing on his own! He is in significant pain but this was a necessary step. After a few days the family will see where he’s at. Hopefully, PT then rehab."

Also on Sept. 3, Diana said, "Today I sit in this hospital living the darkest hour of my life. Kevin is enduring a five hour surgery to stabilize the bones in his neck. He has suffered a complete injury to his cervical spine and today is to prevent him from living in a cervical collar.

"My hope for him is focused on quality of life and that there will be clinical trials to help him move forward. Much of these avenues are not covered by insurance and will be dependent on private funding. I am sharing this because I want people to understand that the fundraising is essential. It can mean the difference in equipment available to him, therapies, vehicles, honestly I don’t even know. I am navigating in the dark focusing on breathing and literally existing as we navigate hour by hour the information we are receiving.

"What has occurred is probably the worst thing that could have happened to him. If you know him you know he is talented but humble, kind, private, and giving among all things. He was the friend that tried to donate a kidney when one was needed. He is the trainer that didn’t charge the kid he knew couldn’t afford the lesson. He is a vegetarian because he found slaughter impossible to support and is so empathetic to living things he couldn’t eat them. He literally helped me give shots of antibiotics to a fish with swim bladder ( not joking) when our daughters fish was upside down.

"He stops to take turtles off the road. Stops to assist when a horse trailer has a flat. He ran from two rings away to help save a horse’s leg that was caught in a roll-top after a spill. So many of you have more stories to retell of how he helped you than I even know. Above all things he is a great father and life partner and as he lays here he is panicking about the three of us instead of himself.

"I am so thankful for all the support we have received there are no words. The cold reality is we are desperately trying to raise money for medical and rehabilitation which I have been told can be staggering. It will be a long, challenging, journey ahead. I want to thank everyone for every prayer, kind word and thought and every dollar that has been donated so far.

"I remain hopeful that as the body heals his condition will improve. Please keep praying that as time passes we will receive a miracle. I am getting messages with stories of people walking and moving after worse injuries. Hope is all I have left and I am hanging onto it with everything I have."