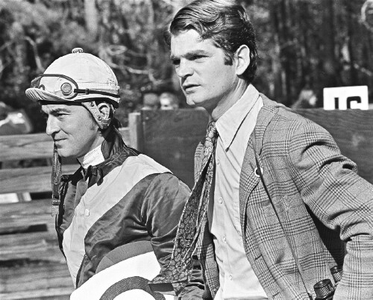 Doug Small (right) with jockey Jerry Fishback in the early 70s. (Photo by Douglas Lee)Douglas Reid Small, Jr. suffered an injury while mountain biking with his dog in Fair Hill, and he died peacefully on Oct. 11, surrounded by his wife, four daughters, several grandchildren, and his dog, Otis, laying on the bed with him.

He was the husband of Lori Small, with whom he shared 31 years of marriage.

Over his career, Small won 150 races from 1964 to 1982, although there were some years during that period when he didn't ride races.

Dougie was a steeplechase jockey for many great trainers including his father-in-law, Burley Cocks, and uncle, Sidney Watters.

BORN IN Champagne, Ill., in 1943, Doug was the son of the late Douglas Reid Small and the late Jane Watters Small.

Doug was a man of many talents.

He studied and became a Master Naturalist, culminating his life long love and passion for all living things.

In addition to these interests, he was a well informed and passionate critic of the current administration.

He loved the thrill of winning a race, whether on a horse or bicycle, against his children or grandchildren.

When Doug left the racing world, he recreated himself as an architect and builder of custom post and beam and historic reproduction homes.

He and his wife, Lori, founded Waterbury Associates, a design, build, kitchen, and millwork business.

He also was a landscape designer and had a great sense of natural settings.

Doug honored his love of humanity and creatures and donated his time and expertise to help anyone in need, be it a family member, an animal, a community member, or someone seeking sobriety.

He is also survived by his siblings, Stephen Small, Sass Merryman, Jacqueline Parashar, and Alistair Small.

Doug was preceded in death by his brother, Richard ‘Dickie’ Small.

His family will be having a private celebration of his life and request that you visit the guestbook at www.kuzoandfoulkfh.com to share your memories and stories. His family is eager to collect and preserve them.

Should you care to make a donation in honor of Doug’s stewardship of nature, please visit www.fairhillnature.org.