From the Thoroughbred Daily News

A gregarious figure who represented a different era in racing, when it was more a sport and less a business, Bob Levy died Wednesday, Nov. 7, at the age of 87. He passed away peacefully and died of natural causes close to his home in Bryn Mawr, Pa. 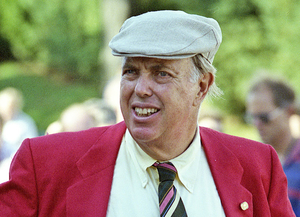 Bet Twice finished second behind Alysheba in both the GI Kentucky Derby and the GI Preakness in 1987, but trounced his rival in the Belmont, depriving him of the Triple Crown. With Craig Perret aboard, he won by 14 lengths over Cryptoclearance, with Alysheba finishing fourth. Bet Twice went on to beat Alysheba a second time, in the 1987 GI Haskell.

HOUSEBUSTER won 11 graded stakes races, including the GI Carter H., the GI Jerome H. and the GI Vosburgh S. Both Bet Twice and Housebuster were trained by the late Hall of Famer Jimmy Croll.

“My father’s greatest moment in horse racing was when Housebuster went into the Hall of Fame (in 2013),” said his son Mike. “Maybe it was because it was towards the end of his life, but it was an accomplishment that he never really thought was attainable. It was the ultimate honor for him.”

In the business world, Levy served as the Chairman of the Board of DRT Industries, Inc., a diversified business based in the Philadelphia metropolitan area, from 1960 to 2011. But he was best known for his love of all sports, and not just racing. A graduate of the University of Pennsylvania after attending the Penn Charter prep school, he founded and organized of the highly successful Little Quakers youth football team in 1953, became the chairman of the Philadelphia Sports Congress in 1995, was an assistant coach for the Penn women’s tennis team and was inducted into the Philadelphia Jewish Sports Hall of Fame (2000).

“My father was an extraordinary man,” his daughter, Kit Feldman, said. “He was larger than life. He was a sportsman, a business industrialist. He was a pioneer in racing and he loved dogs, people and food. He loved Penn, he loved the Little Quakers and Penn Charter.”

His other roles in racing included serving as the president of the Thoroughbred Racing Associations in 1989 and 1990 and he was active with Fasig-Tipton, as a shareholder and member of its board of directors, from 1988 to 2008.

“He was just a regular guy,” said Larry Lederman, the former announcer at Atlantic City. “He also had a really good sense of humor. Whenever you talked to him on the phone, the first thing he would say was ‘What can I do for you?’ He wasn’t just saying that. He really meant it.”

Levy purchased the Atlantic City track in 1967 from the partnership of his father, Leon, and the family of the track’s founder John B. Kelly. In 1983, Levy ushered in a new era in American horse racing, offering the first ever simulcast wagering, taking bets on racing from the Meadowlands. Atlantic City Race Course fell on hard times when casino gaming was legalized in Atlantic City, but not at the racetrack, and began running only abbreviated meets starting in 1998. In 2001, Levy sold the track to Greenwood Racing, the operators of the then Philadelphia Park, which continued the schedule of short meets until announcing in early 2015 that the track would be closed permanently.

“I wouldn’t be where I am today in horse racing if it weren’t for him,” Mike Levy said. “He was a great man to many people. There’s no tragedy here. My father did it all.”

A memorial service will be held at 12:30 p.m. Sunday, Nov. 11, at Joseph Levine & Sons, 4737 Street Road, Trevose, PA 19053. In lieu of flowers, donations are suggested to Thoroughbred Charities of America