All recognized steeplechase races will be steamed live starting this spring

In exciting new for jump racing fans, starting this spring, the National Steeplechase Association will stream live all of its races rather than just the three or four that have live streamed in the pst. 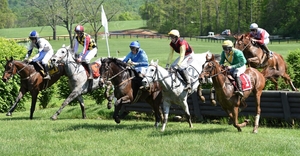 The NSA, in partnership with video provider TPH Productions, will inaugurate professionally produced TV programming of steeplechase race meets for the upcoming 2019 season.

The launch of the National Steeplechase Association Network follows the debut of high-definition video for race stewards last fall and builds upon that innovation.

The network-quality programming, similar to television shows in other sports, will be broadcast over broadband and will be available around the globe.

ALL OF THE NSA’s 28 race meets will participate in the NSA Network shows, and the meets will share in revenues produced by the new programming.

The fully produced TV shows will highlight all the racing action and will feature horses, jockeys, trainers, and standings as the season progresses.

These features will provide an introduction to the sport for new fans of jump racing and will enhance the experience of existing fans.

“The Board of Directors and I are excited about the prospects for the National Steeplechase Association Network and the shows it will be producing,” said NSA President Guy J. Torsilieri. “With these shows, we will be able to reach new audiences in our traditional markets and around the world.”

The NSA Network broadcasts are expected to reach at least five million viewers in 2019, adding to the nearly one million fans who attend the events each year.

In past years, race meets such as the Iroquois Steeplechase, Far Hills Races, and the Virginia Gold Cup have offered professional shows for their races, but  in many cases, if too many peopel joined the broadcast, the broadcast went down before the most anticipated races.

Those types of shows will be available to all meets in 2019, said Steve Hankin, a principal of the NSA Network with Piper Klemm.

A produced TV show--like the ones the NSA Network will deliver--has the capability to build markets and to gain new followers for the sport.

Hankin, a video-industry entrepreneur who is the brother of prominent steeplechase owner Michael Hankin, presented his vision of the new video programming at the annual NSA Race Chairmen’s Meeting in Baltimore on Jan. 17.

In the broadest terms, he said, the goal of the NSA Network is to increase the visibility and popularity of jump races in the race-meets’ home markets as well as nationally and internationally.

Among the features of the new NSA Network shows will be: Full race-day coverage as well as prerace and post-race programming; At least four cameras providing full coverage of the racing action; Professional commentary provided in an NSA Network studio show; An industry-grade uplink to assure a quality video stream onto the Internet; and Full marketing support for participating race meets.

The tailoring will include the number, location, and technology for cameras, as well as the degree of on-site work commentary and fan engagement.

Hankin emphasized in his presentation that the new programming is intended to provide value to the race meets by enhancing their visibility in their local markets and also by providing a new revenue stream through advertising on the shows.

The NSA Network will partner with participating race meets to sell local advertising on the shows and will split that revenue equally with the meets.

Participating race meets will receive support on every NSA Network show and on the National Steeplechase Association website on a year-round basis.

The NSA Network shows also will be highlighted on www.nationalsteeplechase.com.

The NSA Network has assembled a strong, experienced team to deliver the steeplechase TV programming.

Klemm is editor of The Plaid Horse Magazine, a photojournalist, and a social-media expert.

The video imagery is provided by Craig Farrell’s Alliance Productions, whose crews have experience with Major League Baseball, the National Football League, and other high-visibility sports programming.