TRENTON, N.J.--Soon after Governor Phil Murphy signed a bill that provides $100 million over five years to support horse racing in New Jersey, increased purses, big fields and competitive racing led to the biggest night of wagering of the year at the Meadowlands in East Rutherford on March 2. 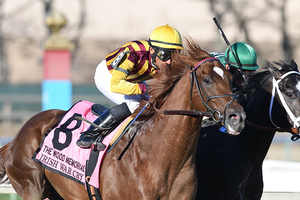 New Jersey-bred Irish War Cry raced at MonmouthPurses were raised thanks to that $20 million annual subsidy from the state recently signed by the governor.

Single-race betting exceeded $300,000 five times during the course of the evening, with the most action taken in the eighth race, when $340,076 was put in play.

Sen. Vin Gopal of District 11 in Monmouth County, home to Monmouth Park and Freehold Raceway, and Sen. Paul A. Sarlo, District 36, which includes, Bergen County, home of the Meadowlands, sponsored the bill.

The Senate approved its version of the bill in December with amendments.

On Jan. 28, the measure was voted out of the Assembly Appropriations Committee and presented to the full Assembly on Jan. 31.

THE BILL provides that the net revenues actually received by the tracks from sports wagering will go to the horsemen’s organizations.

The tracks will have to file annual reports and if the funds have not substantially improved the racing industry in New Jersey the legislature can opt to end the subsidies.

From the results already seen at the Meadowlands, this now seems unlikely. 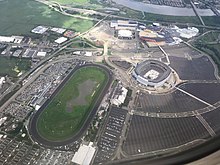 Meadowlands Sports Complex, aerial view The bill appropriates $20 million from the State General Fund to the New Jersey Racing Commission in this fiscal year and potentially an additional $20 million annually in each of the subsequent four fiscal years thereafter.

Thus, the potential aggregate impact of this bill is a $100 million expenditure increase to the State General Fund over a period of five fiscal years.

Sports wagering is offered at the Meadowlands and Monmouth Park race tracks as well as casinos in Atlantic City and online.

Plans are underway to bring sports wagering to Freehold Raceway.

Under the bill, the thoroughbred and the standardbred industries would split the funds evenly.

Monmouth Park plans to use the money to supplement overnight purses.

For many years, Atlantic City casinos provided $30 million a year to the tracks to prop up the racing industry, provided they did not pursue slots, until Gov. Chris Christie was elected.

In 2011, the state-run Meadowlands and Monmouth Park were handed over to private entities to operate, but efforts to bring slots or video gaming terminals to the tracks failed.

Earlier this year, the state won a long federal legal battle over sports betting, and now the tracks as well as the casinos can take sports bets.

The tracks, especially Freehold Raceway, have struggled to attract horses to enter its races which have lower purses than tracks in New York and Pennsylvania which receive funds from on-site casinos and other gambling.