Santa Anita closed to racing and training due to horses' fatalities

ARCADIA, Calif.--Despite one of its biggest weekends of racing coming up, Santa Anita Park closed its racetrack to both training and racing on March 5 due the alarming number of deaths of horses in the past two months. 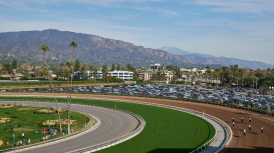 All stakes races scheduled for this upcoming weekend, including the GI Santa Anita Handicap, the G2 San Felipe, a major prep race for the Derby, and the G2 San Carlos will be rescheduled.

“The safety, health and welfare of the horses and jockeys is our top priority,” said Tim Ritvo, Chief Operating Officer of The Stronach Group. “While we are confident further testing will confirm the soundness of the track, the decision to close is the right thing to do at this time.”

Since Dec. 26, there have been 21 fatalities during racing or training.

SANTA ANITA closed the track on Monday, Feb. 25 at 9 a.m. and did not re-open it for racing until Thursday, Feb. 28 to let experts examine the surface.

The 21 horse fatalities is the highest, higher than 20 suffered in 2017 when the track raced 122 days, according to the Equine Injury Database.

The 2017 figures are the latest available.

The Stronach Group has been in constant communication with the California Horse Racing Board and numerous key industry stakeholders who are in full agreement with the decision to suspend racing and training.

The additional testing of the track will be lead by veteran Trackman Dennis Moore, expanding on the ground radar testing conducted earlier this week by the University of Kentucky’s Dr. Mick Peterson.

Measures will include utilizing an Orono Biomechanical Surface Tester, a device that mimics the impacts of a horse running at full gallop allowing engineers to see how the track holds up.

These test results will be evaluated to ensure track consistency and uniformity for both training and racing.

Further, The Stronach Group will be conducting a comprehensive evaluation of all existing safety measures and current protocols.