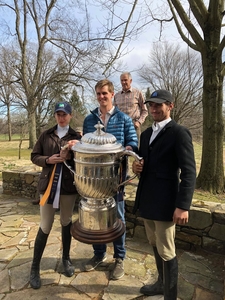 Elkridge-Harford, in fact, dominated the day, with its teams finishing first, third, fourth and fifth, and Poretz rode on three of the, also finishing fourth.

Joe Davis is the moving spirit behind the Elkridge-Harford teams, putting the teams together and cheering them on..

"I want to thank Joe, and my Mom," said Hendriks. "My Mom shouted `Kick on!' as we were starting, and again, thank you Joe."

The course began and ended on Dixon Stroud's property, and, after a sumptuous tea for the competitors, Stroud announced the winners and thanked the landholders, himself, his sister and Jonathan Sheppard, over whose land the course lay, for allowing their land to be torn up.

In fact, after what seems like a full year of rain, it was amazing how well the fields appeared to hold up.

YEAGER is back riding races after suffering a catastrophic fall two years ago at Willowdale in which she broke her back and her neck and sustained a very severe concussion.

"I started riding again last September after I got cleared to ride," said Yeager, who was an exercise rider for Sheppard at the time of her fall.

"I work in Baltimore now, as a marketing assistant at the Maryland Proton Treatment Center, a cancer center," said Yeager. "I miss being at Sheppard's. I worked there for three and a half or four years. But you can only gallop horses for so long."

The winners of the Full Cry Trophy for the team closest to the average time was the combined team of Cheshire/Elkridge-Harford made up of Teddy Davies on Classical Art, Gerard Galligan on King's Apollo and Parker Hendriks on Guts For Garters, who finished in 14:37.

The Green Spring Valley team of Galligan on Dr. K'eough, Sherlock Gillet on Blake and Michael Wharton on Grinding Speed placed second in 15:59 and the Cheshire team of Fiona Fox on Notable Contender, Anne Hamilton on Should Expect and Jen Steinberg on Arwen was third in 18:00.