UNIONVILLE, Pa.--Cheshire Point-to-Point on this Sunday, March 31 at Plantation Field looks like a foretaste of this year's Maryland Hunt Cup, with a field of past winners and competitors of the Hunt Cup entered in the Cheshire Bowl. 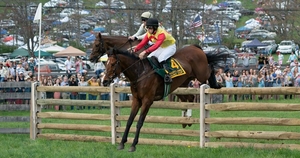 Senior Senator in the 2018 Maryland Hunt CupAnd this year spectators will be able to see the entire race as the new course covers the southern side of Plantation Field and every fence is in view.

Plus, for those who have suffered through freezing cold, snow, sleet and cold rain at Cheshire, Sunday's forecast of temperatures in the mid-50s sounds pretty good.

For those who haven't already reserved a parking space for this great day of racing, it's not too late - go to cheshirepointtopoint.com for information and reservations,

Entries in the Cheshire Bowl include Senior Senator, trained by Joe Davies and ridden by Eric Poretz, who has won the Maryland Hunt Cup twice and will be going for a third win to retire the trophy this year.

ALSO ENTERED in the Bowl is Raven's Choice, trained by Todd Wyatt and ridden by Paul O'Neill, who won the Hunt Cup in 2015.

Also entered in the Cheshire Bowl are Forgotten Knot, trained and ridden by Julie Nafe ,and Ardrahan, trained by Kathy Neilson and ridden by Eddie Keating.

The Bowl promises to be a very exciting race, but it's not the only race on the card to draw illustrious entries.

Guts For Garters, trained by Sanna Neilson and ridden by Parker Hendriks, who won the Maryland Hunt Cup in 2014 and finished second in 2016, is entered in the Amateur Apprentice Race.

With horses cross entered, there's no guarantee all entered in each race will run, but all three timber races drew great fields.

The gates open at Gates will open at 10:00 a.m with paddock time for the first of three pony races at 11:00 a.m., and the first of the three timber races is scheduled for 1 p.m., followed by two flat races.