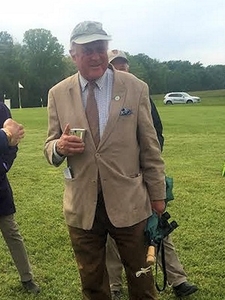 Jonathon SheppardThe 4-year-old chestnut gelding, by Freud out of a Lemon Drop Kid mare, had quite an adventurous trip, but prevailed to win by 2 lengths.

Everyoneloves james bobbled at the break of the 1 1/16mile  turf race, brushing with  Gambler's Fallacy, who eventually finished second.

Despite jockey Eric  Cancel's restraint,  Everyonelovesjames pulled his way to the front and led the way just off the inside rail under a  firm hold, got out three or four paths wide at the half  mile pole  and into the turn, with Cancel nearly standing in the saddle applying a hard hold  to stay three wide as  Cloontia, who eventually finished third, slipped though on the inside to gain the lead.

Cancel appeared to have  an issue with the reins nearing the quarter pole, gathering them up and bunching them as Everyonelovesjames  floated  five wide, taking back the lead and driving to the finish with good courage for the win.

Cancel then needed the assistance of an outrider to pull up after the finish.

"WE HAVEN'T had Everyonelovesjames  for long." said Sheppard.  "He was with a trainer in Florida, and a girl who used to work for me called me to say this was a New York-bred and he should be running in new York, and would I take him, so, of course,  I said yes."

"He's two for two now," said Sheppard."The jockey who rode him in his first race had to go out of town to ride a stakes horse. This jockey wasn't quite as strong."

"He's fine to train in the morning, but he gets strong in the afternoon," said Sheppard. "Maybe we'll have to put different  equipment on him. He's a little  quirky, but he's okay. We'll take him to Saratoga.'

Sheppard next won the second race at Presque Isle  on July 2 with Steve Pazzoglia's homebred Paolia's Heart  by Orientate out of a Yankee Mon mare.

"Steve lives in Western Pennsylvania, so he was there,  and I'm sure he was thrilled," said Sheppard."

Desert Isle, by Bernardini out of a Smart Strike mare, won the 7 furlong turf race  by 3/4 of alength.

Raining Lemons, by Lemon Drop Kid out of a Hennessy mare, got up after a long drive to win by a neck.

Nevisian Spirit, by Congrats out of a Forestry mare, won going away by 3/4 of a length.

Dilly Dilly Philly, by  Jump Start  out of a Congress mare, won by 5 lengths.

The Keeper, by Temple City out of a Nureyev mare, narrowly prevailed to win by a head.