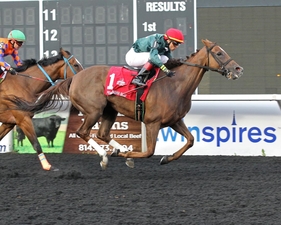 Imply (Photo by Coady Phoography)This was the 6-year-old mare's second win the the Northern Fling, having also won it in 2017, her third win in three starts this year and her sixth win in a stakes race.

Imply raced mid-pack in the 1 mile race, then saved ground on the turn, angled out to be outside the leader, Leland Hayes' Darcy Mae, into the stretch and drove clear late to win by 1 1/4 lengths in 1:36.85.

"She does everything perfectly," said Houghton. "I picked out that race for her, but I wasn't there. I don't ship well."

"HER NEXT race will be on the turf at Pa-Day at the Races at Parx on Aug. 3," said Houghton. "If she does well there, we might give her a bit of a break."

Another of Barlar's homebreds, Vault, also trained by Houghton and ridden by Hernandez, was an easy winner in a $31,600, 1 1/16 mile Allowance race at Penn National on July 5.

Vault, a 3-year-old filly by Jump Start, was rated along the rail, moved quickly to a clear lead near the quarter pole and drew off to win by 10 1/2 lengths.

"She's a nice filly," said Houghton. "I really like her. I think she's going to be a stakes horse."

Trace of Grace,  a 6-year-old by Petionville out of Joy to Run, by Stephen Got Even, raced in the four path down the backstretch while just off the pace, split rivals on the far turn to take the lead and edge way late to win by 1 1/2 lengths.

"She's my own horse," said Houghton. "I bred her, and I own her dam, so that was a nice victory. W.M.T stable is named for the intitais of the names of my three kids."

"She's been knocking at the door but hasn't won in a while until now," said Houghton. "Now I'll have to find a race for her, probably a Pa-bred stakes."

"My wife wants to breed her, but she's definitely going to run next year,"  said Houghton. "She's a nice, sound filly, and sheloves what she's doing." 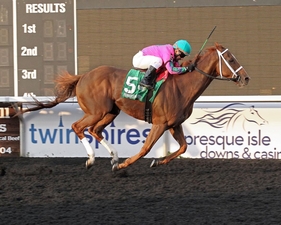 Jaguar Poz sprinted to a clear lead soon after the start and drew off in the stretch to win by 2 1/2 lengths over Missin the Big Dog in 1:37.83.

Jaguar Poz is a 6-year-old gelding by Majesticperfection out of a Five Star Day mare.He now has 10 wins, nine seconds and five thirds from 33 starts and career earnings of $380,941.