OCEANPOINT, N.J.--In a thrilling finish to the MATCH Series, 2W Racing’s Bronx Beauty fought off Ms Locust Point after a long duel in the $100,000 Regret Stakes at Monmouth Park on Sept. 28 and won not only her division but the overall championship, which required a tie-breaker. 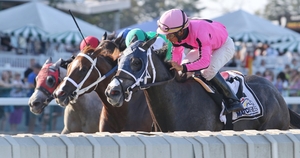 Bronx Beauty, number 2 on the rightBronx Beauty, trained by Anthony Margotta Jr., and Jim Reichenberg and Cash is King’s Ms Locust Point, trained by John Servis, each ended the series with 40 points.

The first tie-breaker is most wins in a division, and Bronx Beauty had three to one for Ms Locust Point.

The pair put on great shows in three stakes in the Filly and Mare Sprint—Dirt Division: Bronx Beauty won the Penn Ladies Dash at Penn National Race Course and the Dashing Beauty Stakes at Delaware Park along with the Regret, and each time Ms Locust Point was a close second.

“IT WAS A fairy tale ending,” Monmouth-based Margotta said. “This is a tremendous accomplishment and I’m so proud of my team. They work hard and deliver under pressure, and Bronx Beauty has the heart. Some horses just have that determination.”

“The races we’ve had with our horse and Ms Locust Point are the kind that can bring people back to the game,” said Richard Woll, the principal of 2W Racing and a New Jersey resident. “It was, oh, so exciting.”

Bronx Beauty, a 4-year-old Pa-bred filly by Liaison, was reluctant to enter the gate for the 6 furlong Regret but emerged with the rail from post two and was just behind Ms Locust Point, who fired out from post 8.

Bronx Beauty gradually edged away to a half-length lead over her nemesis, and won by a length under Paco Lopez.

Bronx Beauty, second choice in the race behind New York shipper Satisfy, paid $5.40 to win and covered the distance in 1:10.39 on a track rated fast.

It was the eighth win—seven of them stakes—for the filly bred by Blackstone Farm.

Bronx Beauty’s breeder will get a $5,000 bonus from the Pennsylvania Horse Breeders Association for being the Pennsylvania-bred filly or mare with the most points in the series.

Margotta had said Bronx Beauty was playing catch up with Ms Locust Point, who started in all five division legs.

The filly missed the first leg at Laurel Park, but made up for it with three victories.

“We were cautiously optimistic we could win it,” Margotta said. “Richard’s grandson had it all figured out. He was keeping track of the points and what the outcomes could be.”

“This has been great,” he said. "The racing has been fantastic, and going to the different tracks in the series has been fun. It’s a really good series.”

In their previous meeting in the Roamin Rachel Stakes at Parx Racing, Bronx Beauty was third and Ms Locust Point fifth.

Margotta said his filly was compromised by her inside post.

“At Monmouth, the rail and the inside isn’t bad, but at Parx it can be,” Margotta said. “Paco is going to be a Hall of Fame rider, and I just let him play the break. I think Bronx Beauty speaks for herself. How many different racetracks has she run on, and how many different riders has she had? This is tremendous.”

Ms Locust Point finished second in the Filly and Mare Sprint—Dirt Division to earn $15,000 for her owner and $10,000 for trainer.

Here’s a look at the other three MATCH Series championship stakes at Monmouth:

On the strength of a pair of seconds in his first two MATCH Series starts and his points for starting four times, Robert Bone’s Completed Pass won the 3-Year-Olds and Up Sprint—Turf Division with 21 points.

“It’s beautiful,” said Laurel-based Claudio Gonzalez, who trains Completed Pass “This is really good for owners and trainers, and very good for the business.” 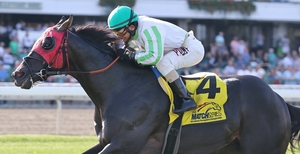 JustaholicThe $100,000 Rainbow Heir Stakes at 5 ½ furlongs on the grass was won by Lucky Man Racing’s Justaholic, who is trained by Tom Clark and was ridden by Jose Ferrer.

It was his first start in MATCH competition this year.

Though he finished sixth in the $100,000 Mr. Prospector Stakes, Hillside Equestrian Meadows’ Laki won his second consecutive title in the 3-Year-Olds and Up Sprint—Dirt Division. 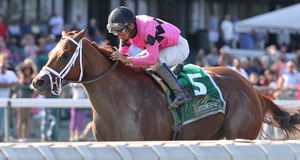 Ballybrit Stable’s Dynatail, trained by Mike Dini, finished fifth in the $100,000 Violet Stakes after back-to-back wins in MATCH stakes and captured the Filly and Mare Long—Turf Division with 22 points.