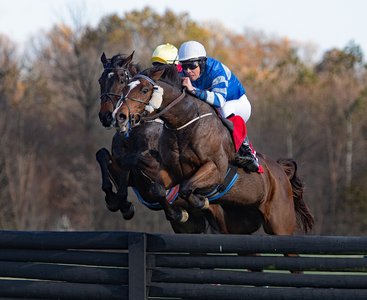 Mystic Strike, right, and Grand Manan over the last in the Pa. Hunt Cup (Photo by Tod Marks)"He jumped super," said Beecher. "I know this horse now. When he gets in front, he starts to look around."

Beecher kept the 7-year-old gelding in second throughout the race behind Grand Manon, began to move up approaching the last fence, drew even and jumped the last beside Grand Manon and drew away for the win.

The stewards announced an inquiry about the first two finishers in the stretch but allowed the result to stand.

"It felt long," said Beecher of riding in the four mile Hunt Cup that drew a huge crowd on a beautiful fall day.

"They weren't planning to run him," said Beecher of Mystic Strike's connections. "I called Todd and told him to enter the horse. I told him that I knew the horse could win it. I don't ride that much any more, so I guess people believe me now when I say that."

BEECHER IS doing more training now than riding but still picks up the occasional mount. 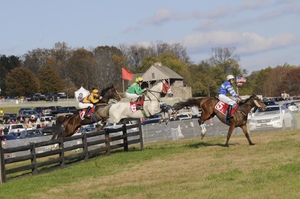 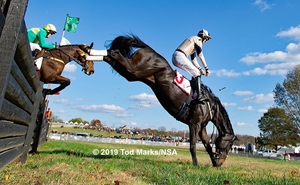 "I bought this horse for Zohar in Ireland after he won the bank race at Punchestown," said Valentine. "A friend called me and told me that he might be a Maryland Hunt Cup prospect. He said he was slow but a good jumper."

"He excels at cross country races like steeplethons," said Valentine, who bought the horse in the summer of 2018.

Just Wait and See's first win in this country was in heavy rain at Willowdale Steeplechase last May.

"I rode her at Genesee Valley, where she was second," said Skylar. "She jumped really well here. She's lovely to ride."

"I was mid-pack during the race and started to make my move when Mark' horse started to tire," said Skylar, referring to third placed Renegade River, trained by William Dowling and ridden by Beecher, who led through much of the race.

"IWlizabeth works for me," said Hendriks. "She also won this race at Fair hill on him this spring."