Michael Matz has two winners, including a Tapit filly 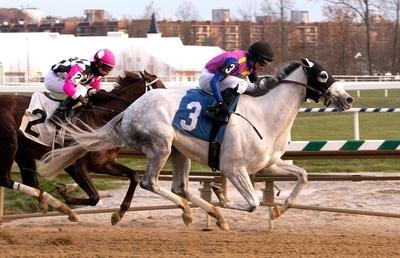 Bo's Image"She's a Tapit filly, and she's a little delicate," said Matz. "She has a mind of her own. She was in California, at the track, and things were happening too fast. They felt she would be better at Fair Hill. It just took her a little while to get it all together."

By Tapit out of a Giant's Causeway mare, Bo's Image has now run three times, finishing third in her first start at Delaware on Aug. 19 and the off the board at Laurel on Sept. 29 before winning on Nov. 14.

BO'S IMAGE set the pace at Laurel, lost the lead on the turn but regained it past the 3/16th and edged away late under a drive to win by 3/4 lengths.

"She's in Florida now," said Matz. "Next she'll do an allowance other than. We'll let her tell us what she wants to do. I think she can run on either turf or dirt, so we have quite a few options with her."

"She was third in her first start and then second, and both those races were on the turf," said Matz. "The turf racing is done, but she's a Md-bred, so we decided to run her at Laurel on the dirt, and we got a little lucky."

Good Life Cider bobbled at the start, recovered, went to the lead leaving the chute and was fully extended at the end to win by 1/2 length.

"She's also in Florida now," said Matz. "Her next step will be an allowance race. It's nice to know that if they take it off the turf we can run her on the dirt."

Running second early in the race, the Pa-bred Dilly Dilly Philly, by Jump Start, took over entering the stretch and won by 2 3/4 lengths.

Dilly Dilly Philly has now won three times, with one second and two thirds from nine starts and has earned $78,176.

In her first start, Morgans Melody won a $17,000, 6 furlong Maiden Claiming race for 2-year-old fillies at Penn National on Nov. 21.

Morgans Melody dueled two wide early on but drew away approaching the quarter pole and went on to win by 6 1/2 lengths.