GRANTVILLE, Pa.--Betsy Houghton had two 2-year-old homebred winners, both trained by her son Bernie, in a 10 day period, while Graham Motion saddled a maiden and an allowance winner, both of which he said are very promising, in the same period. 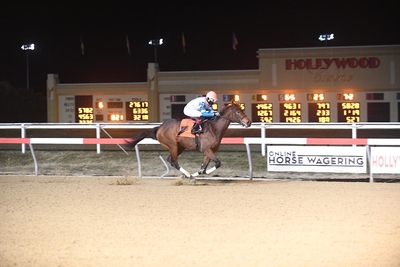 Motion saddled Windy Lane, bred by Tyler B. Jones and owned by Windy Lane Stable, to win a $47,320 Maiden Special Weight for 2-year-old fillies by 1 length at Laurel.

"Windy Lane came to me over the summer," said Motion. "I trained her mother, so I know the family a little. I think this filly will benefit from running longer. this race was visually impressive as she came from far off the pace."

Motion said he plans to keep Windy Lane at Fair Hill through the winter.

MOTION has about 40 horses at Fair Hill over the winter while he was about 25 at Palm Meadows Training Center and 25 at Tampa Bay in Florida.

Mean Mary now has a maiden win at Keeneland on Oct. 12, a second in an allowance race at Aqueduct  on Nov. 16 and an allowance win from four starts.

"She is a very promising filly," said Motion. "I think she's stakes caliber. the was she won at Gulfstream was very brave."

Mean Mary prompted the pace from second, went to the lead at six furlongs, repelled a first bid by second  placed Cap de Creus. trained by Todd Pletcher. kicked clear and the was al lout to win at the wire, while Beale Street, trained by Michael Matz, placed third.

BERNIE HOUGHTON saddled My Lilly Pad, who races in the name of Hillman Racing LLC but who is actually co-owed by her breeder, Betsy Houghton, to win a $28,000, 5 1/2 furlong Allowance race for 2-year-old fillies at Penn National on Dec, 20 by 3 3/4 lengths.

"Joe Hillman, whose wife June is stable manger at Peter Giangulio's Castle Rock Farm, had had some bad luck racing, but he went to Bernie and said he wanted to stay in the game and did I have anything that I wanted to sell him. so I sold him half of My Lilly Pad," said Betsy Houghton.

"My  Lilly Pad is out of our mare Silhouette Island," said Houghton. "We bred her and raced her. She was claimed by an older man and raced until she was 8. When she started to run in lower races, I told Bernie to try to buy her back as a broodmare."

The Houghtons eventually got Silhouette Island back, and her first foal. Fiddler, born in 2015, now owned and trained by Alison Escobar, is still hitting the board at Penn National.

"Silhouette Island is in foal again this year," said Houghton.

My Lilly Pad's first two races were run in the rain over sloppy tracks.

The Houghtons thought that My Lilly Pad was jumping over the light because it was reflecting off the puddles on the track.

"Her third race was the first time that she ran in good conditions, but Bernie told her jockey, Tyler Conner, to be careful because she might jump in the same place again, and sure enough, she jumped the light again,: said Houghton.