Ricky Hendriks saddled the winner of the $30,000 Sport of Kings Maiden Hurdle and both the winner and the second placed horses in the $15,000 Maiden Claiming Hurdle race at the Georgia Steeplechase in Kingston, Ga., on April 7. 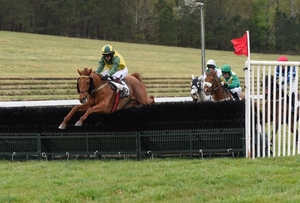 Go Get the Basil (Photo by Catherine French)With those two wins, Hendriks moved into second place in the National Steeplechase Association's standings in both Trainer, Races Won, with three wins behind Jonathan Sheppard, who has four wins, and in Trainer, Money Won, with $91,400, behind Julie Gomena, who has $94,600.

"Go Get the Basil was trained on the flat by a friend of my father, who contacted me and asked me if we would like to have him as a foxhunter," said Hendriks.

GO GET THE BASIL ran on the flat through 2015, at Finger Lakes, where he was an allowance winner and at Aqueduct, Belmont and Saratoga where he placed well in allowance races and a couple of stakes.

"We hunted him, but he was too hot to hunt, so I contacted Marie Esposito, who had owned him and gave him to us, and I asked her if she would be okay with us running him over fences," said Hendriks. She said that sounded like fun."

"This was his fourth start over fences," said Hendriks. "He was second at Aiken earlier this spring and second at Charleston last fall. But his was by far his best race. He won nicely."

In the Maiden Claiming, Hendriks saddled Debra E. Kachel's Gotta Get Away, ridden by Michael Mitchell, to win by 1/2 length over another Hendriks trained horse, Rosbrian Farm's Cheers To Us, ridden by Geraghty.

"We claimed Gotta Get Away from Neil Morris last summer," said Hendriks. "He ran at Aiken, but he fell over a loose horse there. Hopefully, that will be the end of his bad luck."

"Cheers To Us is a new horse for us," said Hendriks. "We bought him from a friend of mine last October. He won a flat race at Cheshire Point-to-Point. This was his first race over fences."

Barnacle Bill finished the two mile race in the fastest time of the day, finishing in 3:45:3/5.