MONKTON, Md,--Sara E. Collette's homebred Zanclus, trained by Neil Morris and ridden by Darren Nagle, led throughout the three mile My Lady's Manor Timber Stakes on April 14 to win by 25 1/4 lengths in 5:471/5, the fastest time of the day. 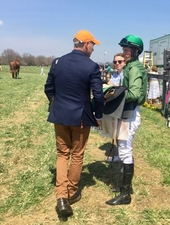 Neil Morris (left) with Darren Nagel after winning My Lady's ManorA huge crowd enjoyed a day of superb racing in 80 degree sunshine with a strong breeze that kept the temperature tolerable.

But horsemen worried that the sudden rise in temperature would unduly stress the horses.

Straight To It, owned by Sheila J. Williams, trained by Jack Fisher and ridden by Willie McCarthy was second, with Mystic Strike, owned by Upland Partners and trained and ridden by Mark Beecher, finishing third.

Zanclus, coming off a big, 12 length win in the Open Timber at Piedmont Point-to-Point, went straight to the front at the Manor, building up huge leads throughout the race while jumping every fence beautifully, standing well back and never chipping in.

"That was pretty much the plan," said Nagle, who had also ridden Zanclus at Piedmont. "He jumped very good. He's a fine big horse. this is his first time in a timber stakes." 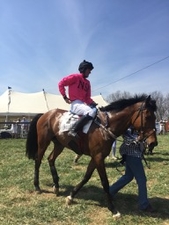 FORMIDABLE HEART, owned by Thomas A. Hulfish, III, trained by Morris and ridden by Archie MacAuley, won the first division of the John Rush Streett Memorial Steeplechase, to be ridden by amateur riders.

Armata Stable's Vintage Vinnie, trained by Joseph Davies and ridden by Chris Gracie, went to the lead from the start, opening up leads of 20 to 30 lengths, but, perhaps overcome by the heat, faded and was caught by Formidable Heart and finished second, with Move-Up Stables and Sally Reed's It's Nothing, trained by Katherine Neilson and ridden by Eddie Keating, finishing third.

"He won two races over hurdles," said Morris. "We hunted him all winter. He won at Piedmont. We thought he would fare well here over the bigger fences. He's a nice horse." 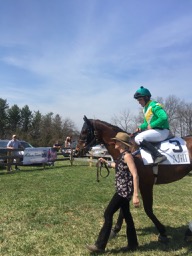 Kathy Neilson in the paddock with Shinobi Neilson saddled Irvin S. Naylor's Shinobi (Ger), ridden by Keating, to win the second division of the John Rush Streett Memorial by 5 3/4 lengths in 6:17: 4/5 over Sportsmans Hall's Hill Tie, trained by Davies and ridden by Eric Porets, with Kinross Farm's Spirit of Shankly (GB), trained and ridden by Beecher, finishing third.

"We've had him for about two or three years," said Neilson. "He's our favorite hunter. Skylar (Neilson's daughter) and Cassie Plumb hunt him. Kathy Rengert found him for us, he was running on the flat. This is his second start over timber." 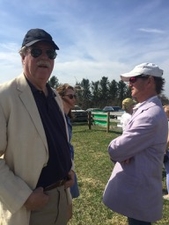 Charlie Coyne of Sycamore Run Farm and Don Cochran in the paddock. Both owned horses in the Schapiro. 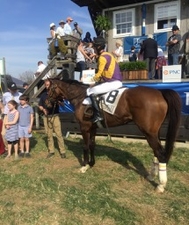 There had been some thought that Blair, nee Waterman, who has been a very accomplished race rider, would ride Witor at the Manor, but Blair said she would never ride a horse of her own.

"He has a good turn of foot for the finish for a timber horse," said Blair of the horse that the Wyatts got after he'd had a number of injuries that kept him from racing.

But, with stretching out times between races for him, the Wyatts have had considerable success with a horse that they are very fond of.

"Just an interesting note, this is the third horse that won at Piedmont that won here today," said Todd. "Both of Neil Morris and Witor won at Piedmont. Blair hunts Witor. We've been very lucky with him."