BUTLER, Md.--Joseph Davies saddled 2016 Maryland Hunt Cup winner Senior Senator, ridden by Eric Poretz, to win the featured $50,000 Grand National Amateur Timber Stakes at the Grand National Steeplechase on April 21, and followed that up with wins in the next two races. 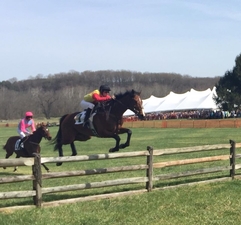 Senior Senator "It was a good day," said Davies.

Senior Senator is nominated for the Maryland Hunt Cup on April 28, but Davies said that he hadn't decided yet if they were going to run him back.

"He had an amazing run yesterday," said Davies on Sunday about Senior Senator's race at the Grand National.

Senior Senator has a history of acting up before a race, often having been permitted to actually saddle outside of the paddock, away from the other horses.

"Some horses freeze before a race," said Davies, who said that wasn't the case with Senior Senator. "He's just exuberant. He wants to get on with it. Just getting him to a race requires expertise and a number of people to tack him up. It can be dangerous."

"HE WAS BETTER before the race," said Davies. "He got away better and settled really nicely. He jumped great. If all goes well, we'll see about the Hunt Cup."

"He's come back from a misfortune," he said. "He had a bad fall at the third fence in the Hunt Cup last year. We were hoping that it wasn't going to be career ending. But he's run three times this year, and he's run better each time. He appears to love to run and jump. 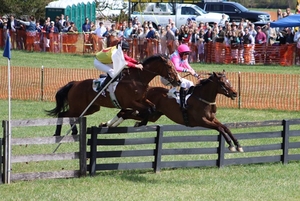 Raven's Choice, left, with Senior Senator in the Grand National"I'm excited about the way Eric has matured as a rider. He's riding great. He encountered some difficulties coming to the last fence. The rider on Raven's Choice gave him a pretty good squeeze into the wing. He got stopped and had to start almost from a standstill and still won."

"Derwin's Prospector had a misfortune at the second to last fence," said Davies  "His French rider got unseated. But he seems to be in good form for the Hunt Cup." 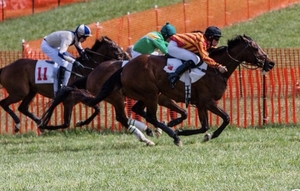 "Hill Tie is a lovely horse," said Davies. "He's a little young for the Hunt Cup, as is the horse that won the third race. Blythe hunted Hill Tie all winter. He's a great jumper. We'll probably run him in the Hunt Cup or the Gold Cup next year. Eric gave him a lovely, waiting ride, and he came running at the end.

Stand Down was an Irish point-to-pointer. The sales agent told me he was 16.2h, and he's actually 15.1 1/2h. I nearly sent him back, I was so angry with the agent. I asked him for one fact about the horses, and he missed it by four inches. He ran quite well at the National. He's got a great little engine. Eric lost his stirrup and jumped the last two fences without a stirrup."