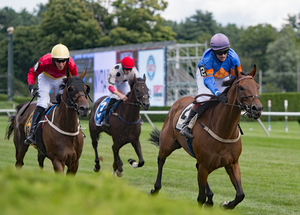 Optimus Prime wins the Turf Writers over New Member and Iranistan.The win on Aug. 23 in Saratoga vaulted Hendriks into the lead over Jonathan Sheppard in Trainer, Races Won, with 12 wins to Sheppard's 11, and also gave him the lead in Trainers, Money Won with $507, 250, it placed Rosbrian Farm on top of the Owner, Money Won list with $357,700 and put Geraghty into the exclusive American rider's club of 100 wins as well as moving him into first place in Rider, Money Won with $481,000 and into second in Rider, Races Won, with 10 wins to Jack Doyle's 12 wins.

It was the second stakes win in as many days for Hendriks and Geraghty, who had teamed up to win the $75,000 Michel G. Walsh Novice Stakes with Surprising Soul, owned by Ricky's Mother Wendy, on Wednesday.

"It was a big, big two days," said Hendriks. "It was unbelievable, really exciting."

It was a exciting finish for Surprising Soul, who was leading by  3 1/2 lengths in the stretch, and just held on to win by a head over Robert Kinsley's No Wunder, trained by Elizabet Voss.

IT WAS AN easier win for Optimus Prime, who won by 1 1/4  lengths over Armata Stable's New Member, trained by Jack Fisher, with the favorite, 4-year-old Iranistan, owned by Hudson River Farms and trained by Sheppard, running third against older, more experienced horses.

Optimus Prime, who was bred in France, most recently raced in England where he won three novices races in 2017 and 2018 before finishing fourth in the Swinton Handicap Hurdle on May 12 at Haydock Park.

Hendriks said that when Mahoney gets a list of possible horses to buy that he gives that list to Hendriks and Geraghty.

"We both liked the horse, so George went to work, negotiating to buy him," said Hendriks."We bought him sight unseen. He was recommended to us by the jockey who usually rides him in England, Noel Fehily. We watched the videos. I met with George. He said, 'What do you think?' I said, 'We need this horse. He's a good horse.' 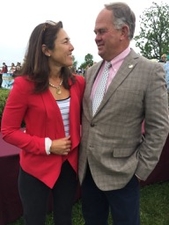 Ricky Hendriks and Eve Ledyard at Radnor races"He was turned out for about a month before we got him," said Hendriks. "This was a race we bought him for, but it was going to be tight to get him here. We had just 50 days. In the beginning, we did a lot of jogging. Eve (Ledyard, assistant trainer/girl friend) did all the work with him. We just worked backwards from the race; we have to start galloping in X amount of days, we have to start breezing in X amount of days. It all worked out. It was fun."

"Our team has a done a great job getting him here," said Hendriks. "We worked him with our horses at home. His last couple of works were like, 'Oh, my God.' He has demolished all of the horses we have at home."

"He's probably one of the quietest horses we have," said Hendriks, who has Optimus Prime back at his farm in Coatesville, Pa. "He has a wonderful temperament."

"That's the great thing about training for George," said Hendriks. "He lets you do what's best for the horse."

"I rode in this race when I was a jockey when I was 18-years-old, kind of got my career started," said Hendriks. "For (Burling Cocks), I rode Zaccio. It was a big thrill for me. It's a big thrill to be here again as a trainer."

Hendriks also trained the winner of the Turf Writers in 2004 with Tres Touche.

"He's a lovely horse," said Geraghty. "He did his job really well, and the future is bright for him. I was traveling so easy the whole way. Down the backside I was traveling very easy, then on the bottom turn I was swinging off him. Once I got him split outside, I moved him out wide and just came with a run, and he did it easy at the end. He's the real deal, that horse."

"It feels good," said Geraghty on winning his 100th race in the U.S. "It's very nice. I've ridden a lot of winners in Ireland and stuff like that, but it's a milestone to ride 100 winners here in this country. It's a lot smaller industry over here than it is in Ireland and the U.K. It's definitely enjoyable. Another G1, which is even better. It's nice to do it in style."

"I'M ON CLOUD nine," said Wendy Hendriks of her Surprising Soul's win in the Novice Stakes on Wednesday. "I got him two years ago at a Kentucky

Wendy Hendriks at Radnorsale. I noticed him because he was a really good loking horse. I looked at his races, and he'd been running short on dirt. I said to Ricky, `Let's get him and try running him over fences.'"

The Hendriks did get him and ran him twice on the flat, winning once at Penn National, before switching him to steeplechasing.

"He's been good ever since," said Wendy. "He seems to like soft going. He loved it at Radnor (where he won the G3 National Hunt Cup Hurdle Handicap). That track was hock deep."

"Surprising Soul is going to go to Far Hills in the Novice Stakes," said Ricky. "That's going to be an extremely tough race."

"He runs okay when it's not soft," said Ricky. "Last year the ground was very hard at Tryon, and he won wire to wire. But he prefers soft going."

Wendy said that she had stayed with Linda and Frank Alexander, longtime friends, while in Saratoga,

Frank, now retired, was farm manager for Alfred Vanderbilt's Sagamore Farm in Maryland before taking out his  trainer's license in 1964.

He had great success as a trainer, including In 1994 training Cherokee Run to a win in the Breeders' Cup World Championships and earning American Champion Sprint Horse honors..

"They're such fun," said Wendy of the Alexanders. "And Ricky and Eve had a cocktail party Wednesday evening. It was a great mix of people."