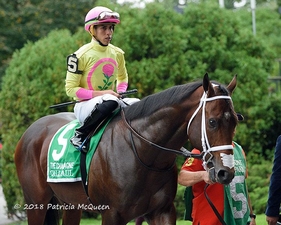 Call Paul now has two wins and a third,having previously won a maiden race at Delaware Park on July 5 and the G2 Saratoga Special on Aug. 12.

UNION STRIKE, by Union Rags ,recovered from a slow break and made the most of a ground-saving late run to win the G2, $300,000 Gallant Bloom Handicap for fillies and mares at 6 ½ furlongs on Sept. 23.

Owned by Mick and Wendy Ruis, trained by Steve Asmussen  and ridden by Jose Ortiz, Union Strike broke last of seven, saved ground through the turn and powered through an opening along the rail to hit the wire a half-length in front of Your Love in the winning time of 1:15.24.

THE VICTORY was the third lifetime for the 4-year-old Union Rags filly, adding to a maiden-breaking win in the 2016 G1 Del Mar Debutante as a 2-year-old and the listed Santa Paula in April 2017 at Santa Anita Park.

Union Strike was fourth last time out in the Grade 1 Ballerina on August 25 at Saratoga Race Course, where she closed from the back of the pack to cross the wire five lengths behind Marley's Freedom.

"The last time she ran, she grabbed a quarter and in a previous race she went to her nose before, so I didn't mind a little bit of a slow start, but when I saw the half going in 45 I thought we had a shot, because we needed a little bit of something to run into," said Mick Ruis. "In the Ballerina, the field had a lot of speed and the pace was slow. She was the only one coming at the end real hard. Today, she gave a top effort."

BERNIE HOUGHTON saddled Imply, bred and owned by Barlar, LLC. and ridden by Julio Hernandez, to win the $122,750 Plum Pretty Stakes at Parx  on Oct. 6.

Imply won the 1 1/26 mile race by 4 lengths over Disco Rose with Trace of Grace, also trained by Houghton, third.

Imply ran midpack in the eight horse field, was eased out on the far turn. launched her bid on the final turn and drew away under strong handliing. 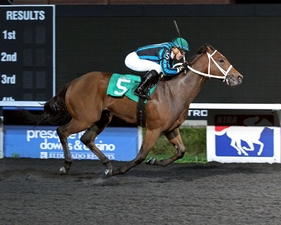 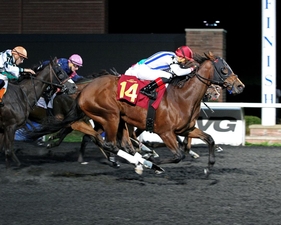 Point System owned by Pin Oak Stud, trained by H. Graham Motion and ridden by Pablo Morales, winning the $100,000 the H.B.P.A Stakes at Presque Isle Downs at 1 Mile-70 Yards in 1:42.48 on Oct. 4, over Lift Up and Burma Road (Photo by Coady Photography) 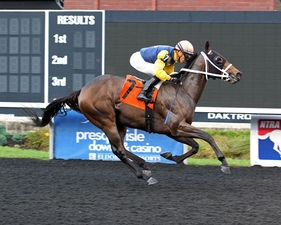 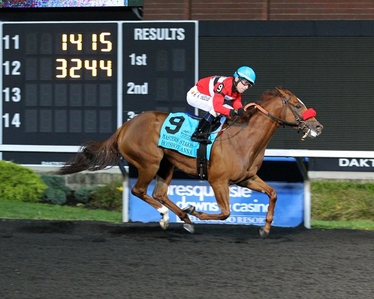 Hotshot Anna, owned and trained by Hugh H. Roberston and ridden  by  Antonio A. Gallardo, winning the $400,000 G2 Presque Isle Downs Masters Stakes at 6 1/2 furlongs on Sept. 17, over Let It Ride Mom and Crazy Sweet (Photo by Coady Photography} 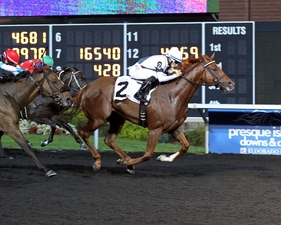 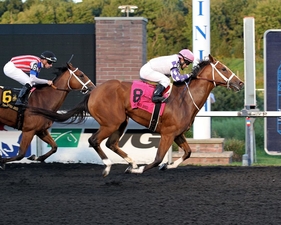