Three Horses To Watch At The Breeders' Cup Classic

The Breeders’ Cup Classic is one of the signature races in the United States’ horse racing calendar and this year’s event should be no different with several quality competitors vying for the crown.

Baffert will be in the mix once again with one of his leading charges, Mckinzie, who will be battling alongside Accelerate and Catholic Boy for the title.

In the absence of Good Magic, who claimed a fine victory at Monmount Park earlier in the campaign in the Haskell Invitational Stakes, due to injury, Mckinzie is a decent shot for the crown with Betway, boasting solid odds of 6/1 for the win.

We’ll now break down the form of the leading trio over the course of the season, offering an insight as to which horse will emerge victorious from the meet.

Widely considered the leading contender for the crown, Accelerate has boasted an impressive 2018 campaign. 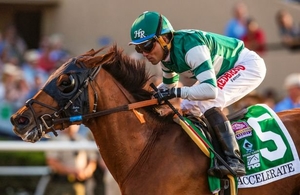 AccelerateJohn Sadler’s charge began his term at the San Pasqual Stakes in Santa Anita, where he delivered a composed performance to triumph by one-and-three-quarter lengths ahead of Prime Attraction. He made a statement in his first Group One outing of the term, putting forward a dominant run in the Santa Anita Handicap, blowing away the rest of the field to canter over the line.

City of Light had his number in the Oaklawn Handicap, possessing the pace down the stretch to beat out Accelerate by the tightest of margins, but revenge was soon to be had on his return to Santa Anita. City of Light’s win saw him installed as the favourite for the Gold Cup, but Victor Espinoza got his charge back into a rhythm in the saddle, producing a fine run to claim the title by four-and-a-half-lengths. He has maintained his form, reeling off two further victories at the TVG Pacific Classic and the Awesome Again Stakes, sending the five-year-old into the Classic with momentum.

Baffert’s charge only made his debut at this time last year in the Maiden Special Weight at Santa Anita, earning a victory in his bow. In his next outing at the Los Alamitos Cash Call Futurity, he was beaten out down the stretch by Solomini, only to be handed the win due to his rival’s disqualification after a collision with Instilled Regard. Mckinzie returned to his peak form at the Sham Stakes at Santa Anita, delivering his strongest performance to finish comfortably clear of the field by three-and-a-quarter lengths.
The three-year-old put forward a strong statement at the San Felipe Stakes, even though the race was to end in disappointment. He was considered the favourite for the event, and although Mckinzie was pushed all the way down the straight by Bolt D’Oro, he was first over the line, but the victory was taken away due to a disqualification. After a 196-day break, Baffert’s charge returned to the track at the Pennsylvania Derby. The American horse delivered another fine run, displaying no signs of rust on the track as Mike Smith found a rhythm in the saddle that allowed the bay colt to finish one-and-three quarter lengths ahead of the rest of the field. Although he lacks experience, Mckinzie is the competitor to watch in the Classic.

The three-year-old had an underwhelming start to the season but has found his form, reeling off three wins on the bounce. 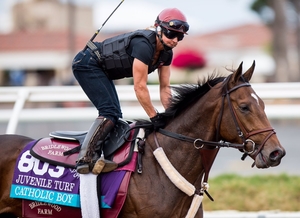 Catholic BoyHis term began at the Tampa Bay Downs in the Sam F. Davis Stakes, and although he was the favourite for the race, Catholic Boy was beaten by half a length by Flameaway. Jonathan Thomas’ charge struggled once again this time at the Florida Derby, placing down in fourth well off the pace of Audible. However, his fortunes changed at Pennine Ridge Stakes at Belmont Park. Analyze It was the overwhelming favourite for the race, but Catholic Boy with Javier Castellano at the reins produced a stunning effort to beat out the leading contender by a neck.
He carried that form into the Belmont Derby Invitational Stakes where he was faced with his rival once again. The two horses duelled it out down the stretch for the second race on the bounce. Catholic Boy emerged victorious, claiming the title by a head. The three-year-old secured his next win at Saratoga, delivering a comfortable victory ahead of Mendolssohn at the Runhappy Travers Stakes by four lengths. He has form and the knack for an upset on his side, therefore Catholic Boy could be a winner in the Classic.