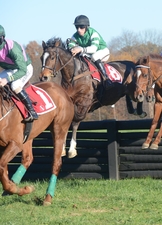 Stand Down, no. 8, behind Canyon Road (Photo by Alix Coleman)This was only Stand Down's fifth career start under rules in this country and his third win.

"We bought him last fall in England," said Davies on a telephone call from Dubai where he was with his son Teddy, who was racing in a pony race there. "He'd won a point-to-point in Ireland."

"We thought he was pretty small when we saw him getting off the plane," said Davies. "He was supposed to be 16.1-hands, but he was only 15.3. I was upset with our agent, but we had him."

"Once we got over his size, we began to like him," said Davies. "He was a little tricky in the beginning. He had a tricky mouth. But Blythe worked with him and we got him going."

"We ran him at Cheshire, then he started winning at Elkridge-Harford," said Davies. "We ran him in the little race at the Grand National, and he won that, and then he won at Willowdale."

"This fall, he ran at Geneseo, and he got a bit tired, and that might have discouraged him," said Davies. "He ran at the Gold Cup, where Doc Cebu and Le Chevalier set a good pace. With that discouraging race a week before, he just never really ran at the Gold Cup, so Eric pulled him up two fences from home." He came back well from that, so we decided to give him one more run at the Hunt cup, and he ran great." 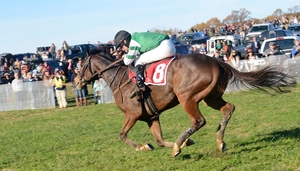 Stand Down on the way to the finish line (Photo by Alix Coleman)GRAND MANON, trained by Billy Meister, set the pace but gave way after the fifth-last fence and pulled up before the third last while Stand Down was rated through two and a half circuits of the 4 mile timber race, began to move up at the 14th fence and gained command at the last fence to beat Irvin Naylor's Super Saturday, trained by Kathy Neilson and ridden by Gerard Galligan by 7 3/4 lengths, with Gordonsdale Farm's Canyon Road, trained by Christopher Kolb and ridden by Kieran Norris third and Carrickboy, owned and trained by Ricky Hendriks and ridden by Jack Doyle, fourth. 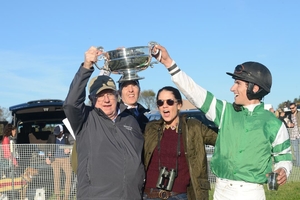