Accelerate Out for Further Glory

Accelerate proved his class with an outstanding run at the Churchill Downs to win the Breeders' Cup Classic. 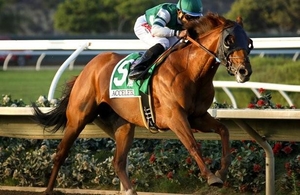 AccelerateJohn Sadler’s charge put forward a fine performance to claim the prestigious prize, and now owners Hronis Racing will be eyeing his next challenge.

It could come at the Pegasus World Cup at the end of January at Gulfstream Park in Florida.

The last two winners of the Breeders’ Cup Classic – Arrogate and Gun Runner - have travelled to the World Cup and have left the venue victorious.

Given the quality of his display at the Classic, Accelerate is backed in the latest horse racing betting odds at 5/2 to triumph at the event.

THE 5-year-old has enjoyed a steady rise to the top of the sport after an inconsistent start to his career.

It was only last year when Accelerate began to make his mark, beginning just after Christmas when he finished second at the San Antonio Stakes, slightly off the pace of Giant Expectations.

In his next outing at Santa Anita, Sadler’s charge was able to get over the line at the San Pasqual Stakes, defeating a talented field by a comfortable margin down the stretch.

Accelerate established himself as the leading contender for the Santa Anita Handicap due to the strength of his victory in February.

With Victor Espinoza in the saddle, he was truly dominant on the track, beating out his nearest rival Mubtaahij by five-and-a-half lengths.

The American horse had issues on his first race away from Santa Anita of the campaign, although he almost made enough of a surge down the stretch to compete for the win at the Oaklawn Handicap.

However, his compatriot City of Light held off his challenge and was able to claim the victory by a neck.

City of Light’s victory saw him given the edge for the Gold Cup at Santa Anita by the bookmakers. 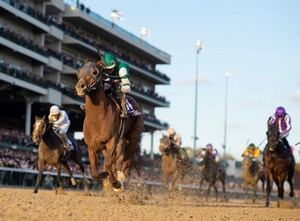 Accelerate was to prove a point with his performance on his favourite racecourse, using his power to pull away from his rival, who was unable to match his speed.

Sadler’s charge cantered away down the stretch to secure his then most important victory.

After an 85-day break, the 5-year-old did not lose his vigour or speed as he produced another imperious display at Del Mar, taking the TVG Pacific Classic crown by 12-and-a-half lengths.

The winning habit struck again when he was able to triumph at the Awesome Again Stakes at Santa Anita, clinching his fifth victory of the campaign.

Accelerate had momentum ahead of the Breeders’ Cup Classic, although he was not considered the favourite for the event as McKinzie was present in the field.

However, the 5-year-old delivered an excellent performance to prove his doubters wrong as he established a rhythm and the lead and did not relinquish his advantage, beating out his nearest rival Gunnevera by a length.

Sadler’s charge has displayed his quality throughout the season and should have no issues maintaining the standard of form at Gulfstream Park as he aims to become the third horse on the bounce to win the Classic and the Pegasus World Cup.