HALLANDALE BEACH, Fla-Dorothy A. (D.D.) Matz' Tequilita, ridden by Luis Saez, won the $100,000 G3 Rampart Stakes at one mile at Gulfstream Park on Dec. 15, improving her career statistics to five wins, four seconds and two thirds from 19 starts and earnings of $666,100. 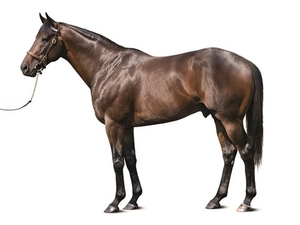 Street Sense. Tequilita will be bred to him next spring.Tequilita’s win was her first since taking the G3 Charles Town Oaks on Sept. 23, 2017.

Her trainer, Michael Matz, who also trained Tequilita's sire, Union Rags, was interviewed on television before the race.

“She’s better if she lays a little bit off the pace and then just keeps running at them,” Michael said. “Sometimes, if she gets a lead, she’ll just kind of wait a little bit. Saez has ridden her a bunch of times and he’s done really well with her."

"We’re going to breed her this spring, and my wife said let’s finish up in Florida here, and thank God we ended up on a good note, because there was a little bit of a lull there for a while," said Michael. "I think it was basically my fault. After her 3-year-old season, she acts and she trains like she could stretch out, but she just wants one turn. I think there’s another race down here for her. This is her best distance, a one-turn mile. If it is her last race, then she went out on a winning note.”

"We're going to breed her to Street Sense," said D.D. "I have a contract for him, and I think he's a good physical fit for her. I hope he'll help to stretch her out (helping her foal to run longer distances)."

"Street Sense is reasonably priced, and it's hard to find a quality stallion at a good price," D.D. said.

He has sired 11 horses who have won over $1 million, and one of his most recent winners is McKinzie, who won the G1 Pennsylvania Derby.

"The breeding sheds don't open until mid-February, so if Tequilita is doing well, and we find a good spot for her, we'll run her again," said D.D. "She's had a great career, and she's been good and sound. She doesn't owe me anything."

The Matz have  a full brother to Tequlita who will be a yearling on Jan. 1.