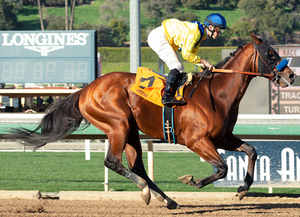 Dessman Dessman, out of Frolic's Appeal, by Trippi, won by 7 1/2 lengths and earned the honor of being named a Thoroughbred Daily News Rising Star.

Racing second from the starts, she took the lead in upper stretch and won clear under urging.

Spring Lilly, a 4-year-old filly out of Taro, by Bertrando, is owned by Pam and Martin Wygod and trained by John Shirreffs and is multiple stakes placed with three wins and three thirds from nine starts and earnings of $147,075.

Dessman, owned by Sheikh Mohammed bin Khalifa al Maktoum and trained by Bob Baffert, who saddled a number of Rising Stars last year, went off as the 4-5 heavy favorite in his first start and was a very impressive winner.

He was off a step slowly and was third in the early stages of the 6 furlong race.

He moved up to the leader after the first quarter and drew away impressively in the stretch to win by 7 1/2 lengths over Norski and stablemate Scalper.

Dessman was bought for $750,000 as a 2-year-old at Fasig-Tipton Gulfstream Sale.