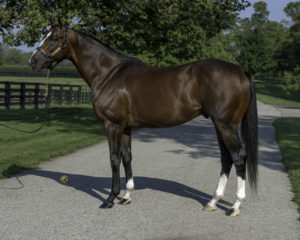 The 9-year-old bay also finished second to Verrazano, only beaten by 3/4 length, in the 2013 G1 Wood Memorial, and he was fourth in the 2013 Kentucky Derby to Orb, beating such top horses as Palace Malice, who won the Belmont, Will Take Carge, who won the Travers, and Mylute. .

He is by the sire of sires Tapit, whose sons include Frosted, Tonalist, Constitution and Tapiture.

"Normandy Invasion has the physical appearance and the same pattern as other successful G1 quality horses that I have selected such as Havre de Grace, Songbird and Midnight Lute," said Tom McGreevy, a very famous selector of horses. "This is attested to by his second in the Wood Memorial and fourth in the Kentucky Derby. He possessed both speed and stamina. His track record at a mile on dirt at Gulfstream in 1:33.13 will take an extremely talented horse to break."

For more information, please call Ann Schultz at 717-235-4954 or email her at This email address is being protected from spambots. You need JavaScript enabled to view it..

Our house is always open ... Just give us a call to schedule a visit to the farm.

NEW FREEDOM, Pa.--Lord Shanakill is the sire of 12 stakes horses, eight of which are graded. 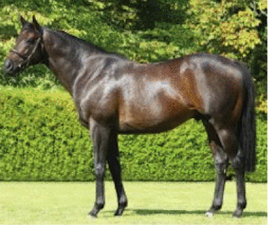 Lord Shanakill is half brother to G1 winner, Together Forever (Ire), and he is from a family of champions, including Augustin Stable's Forever Together, trained by Jonathan Sheppard to win the 2008 Breeders' Cup Filly and Mare Turf Stakes.

In his first few crops, Lord Shanakill has produced the G1 winner of the E750,000 Prince of Wales’s Stakes at Royal Ascot, My Dream Boat (Ire), who defeated two of the best racehorses in the world, Breeders’ Cup Turf winner, Found (Ire), and the number one rated, A Shin Hikari (Jpn).

In 2017, Lord Shanakill’s son, Marvel Hero, lowered a 12-year course record in Hong Kong with an impressive four and a half length win of the HK$2,500,000 Class 1 Happy Valley Vase handicap.

Lord Shanakill had tremendous speed and won in distances from 6 furlongs to a mile. His sire, Speightstown, has been successful on both dirt and turf surfaces.

For further information, call 717-235-4954 or email This email address is being protected from spambots. You need JavaScript enabled to view it..

Royally bred Rimrod is a great bargain for Pa. breeders

WEST CHESTER, Pa.--RIMROD brings the best American and European bloodlines to the breeders in Pennsylvania. 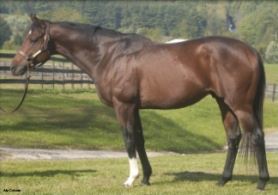 He met and defeated European Sprint Champion and leading sire, OASIS DREAM and many of Europe’s finest runners.

He has sired 62 percent winners from starters, and has an average earnings per runner of $72,425, which is 48 times his stud fee.

All in all, RIMROD is a fantastic bargain for breeders in Pennsylvania.

Owned by George Strawbridge, Jr., Rimrod is a registered Pa. stallion and stands at Castle Rock Farm in West Chester, Pa. for $1,500 LFSN.

CHESAPEAKE CITY, Md--One of the most dynamic runners of his generation, classic-placed IRISH WAR CRY is the first son of two-time Horse of the Year and leading sire Curlin to stand in the region, and the apple doesn’t fall far from the tree. 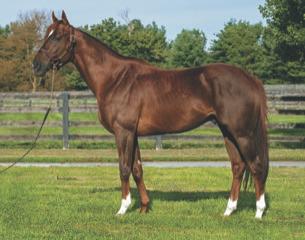 The gorgeous chestnut proved his grit and determination repeatedly during a career of four stakes wins and earnings of $1,257,060 while racing from 2 to 4.

IRISH WAR CRY was undefeated at 2, winning at 6 and 7 furlongs, captured the Gr. 2 Holy Bull at Gulfstream Park and Gr. 2 Wood Memorial at Aqueduct to rank as one of the favorites for the Kentucky Derby-G1, and led the majority of the 11⁄2 miles of the Belmont S.-G1 as the favorite, battling gamely to the wire to finish second. 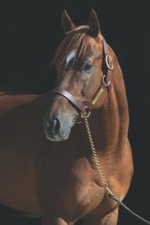 IRISH WAR CRY is out of a winning Polish Numbers mare from a family of European classic winners and is a half-brother to Gr. 3-winner IRISH STRAIT, Irish Politics and to the dam of 2019 stakes winners Irish Mias and Regally Irish.

For more information, please call 410-885-2855 or email This email address is being protected from spambots. You need JavaScript enabled to view it..

Madefromlucky has both racing ability and pedigree

CHESAPEAKE CITY, Md.--Classically-bred MADEFROMLUCKY offers a combination of racing ability and pedigree in an impressive package. 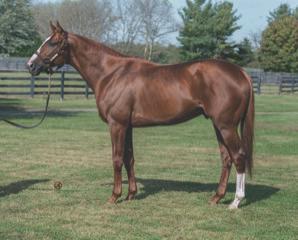 One of the richest sons of Gr. 1 Preakness winner and two-time champion Lookin At Lucky – behind 2018 Breeders’ Cup Classic-G1 winner and champion Accelerate and 2019 Kentucky Derby-G1 winner Country House – MADEFROMLUCKY is from a family of top sires, the most prominent his dam’s full-brother, three-time leading sire TAPIT, one of the most influential and sought-after stallions in the world today.

His second dam, stakes winner TAP YOUR HEELS, is a half-sister to champion sprinter and top sire RUBIANO.

Also found in the family are Belmont S.-G1 winner and champion Summer Bird and Glitterman, both Gr. 1 sires.

MADEFROMLUCKY won the Gr. 2 West Virginia Derby and Gr. 2 Peter Pan S. at 3, and stakes placings included a second to American Pharoah in his stakes debut.

His final two starts were stakes wins, one in the 11⁄2-mile Greenwood Cup S.-G3 by more than 12 lengths.

He retired sound as a millionaire with 16 wins or placings in 24 starts.

His first foals are yearlings.

For more information, please call 410-885-2855 or email This email address is being protected from spambots. You need JavaScript enabled to view it..

UNIONVILLE, Pa.--Keltic Lion, whose barn name is Charley, is a bay, 2005 ISH, 16.3h, bay stallion by Lux-Z out of Karigal Lion, by Erigal Flight who is offered at stud by world renowned eventing star Bruce Davidson. 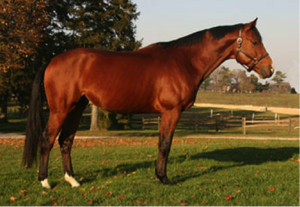 Keltic LionIf you are looking for a stallion that has a marvelous disposition, athleticism and good-looks and passes those traits to his offspring, then look no further!

By leading jumper sire Lux-Z, the winner of 1,000,000+ Euro who was a competitor at the Sidney Olympics and the World Equestrian Games, Keltic Lion is out of Karigal Lion, who is a sister of Eagle Lion, who won Badminton '95 and completed numerous other Four-Start Events without jumping penalties. 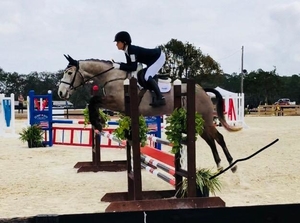 One of Keltic Lion's getCharley's offspring can excel as jumpers, hunters and eventers

These pictures tell it all!

Charley himself was an up-and-coming event horse until he lost an eye in an accident when he was 7.

There is collected cooled semen, and Charley's stud fee is $1,500.00 LFG, plus collection and shipping, if needed. 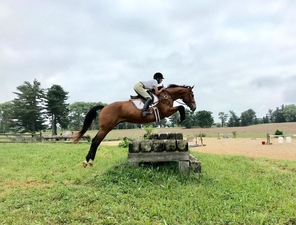 For additional information call Bruce Davidson at 484-431-8262 or stallion manager, Janis M. Smith at 610-357-1763, or email her at This email address is being protected from spambots. You need JavaScript enabled to view it.

LITTLESTOWN, Pa.--Well Spelled, a graded stakes winner of $364,160, will stand the 2020 season at Judy Barrett's Godstone Farm in Littlestown. 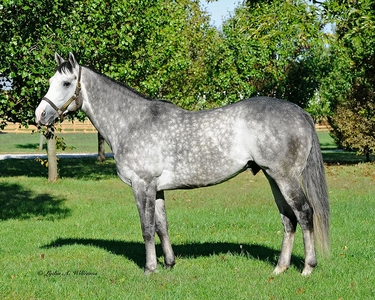 Well Spelled won two stakes, the first of which was the G3 Jersey Shore Stakes at Monmouth Park on July 7, 2012.

He won the Gallant Bob Stakes at Parx Racing with a 106 Beyers speed rating, and in that race he defeated Eclipse Award winner and Breeders Cup Sprint Champion Trinniberg.

Among others he defeated in his illustrious career was multiple G1 winner Private Zone, who retired with $2.9 million in earnings.

Well Spelled was elected the Parx 3-year-old Sprinter of the Year in 2012. 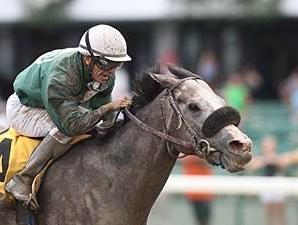 His oldest get are 3 year olds, and he has numerous winners, including a stakes winner in his first crop, among his offspring.

By Spellbinder out of Well, by Well Decorated, Well Spelled is a half brother to G1 winner Kobe's Back and is a grandson of Storm Cat.

"We're excited about Well Spelled and wish you the best racing and breeding luck in 2020," said Barrett.

For more information and to book your mares, contact Barret at 717-359-5365 This email address is being protected from spambots. You need JavaScript enabled to view it. or visit www.godstonefarm.com, or contact Frank R. Vento , Vento Equine LLC, at 908-433-3639. 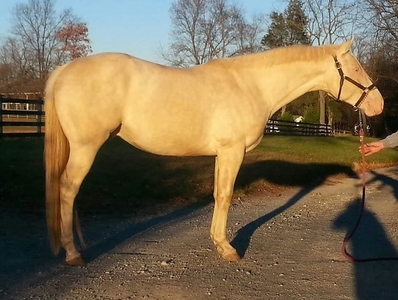 Whistler Mtn Gold is by palomino Golden Whistler, 2006, by Guaranteed Gold, out of O'Golden Fair Rose, 2004, by GP's Krugerrand.

He is one of only a handful of Jockey Club registered thoroughbreds that are rare cremellos.

He gets palominos and buckskins with chestnut and bay mares.

Two of his get, Milky and Glitter Please, are a show hunter and of a dressage family.

He has an extraordinary quiet temperament.

AI is possible through New Bolton with additional collection and shipping fees.

Frisantos is an eye-catching stallion that brings a fresh pedigree, modern type and top potential for sport. 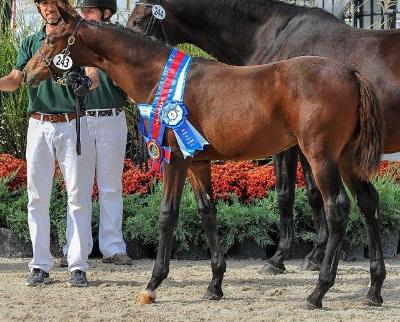 Frisantos earned 9’s for character and work ethic at his 14-day test.

He has completed his stallion testing via the Sport Test option and his canter and rideability were well-rewarded highlights.

Under Michael Bragdell, he was the named Alternate for the USEF Young Horse National Championships and consistently earned scores in the 70’s at First Level in 2019. 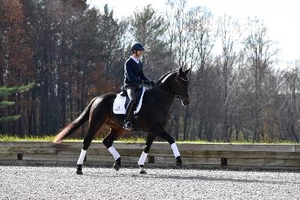 Frisantos' sire is the highly popular Franziskus, who is winning top ribbons at prestigious CDIs such as Aachen and Wiesebaden with Ingrid Klimke.

Franziskus descends from an established line of Grand Prix horses.

Grandsire Fidertanz is currently ranked seventh on the WBFSH Dressage Sire rankings, and his offspring are highly praised by riders. 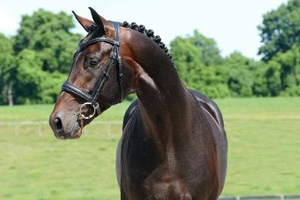 Her oldest offspring are competing well in dressage ,and she is already the granddam to three approved stallions.

Highlighting her versatility, Esprina is also approved into the Hanoverian Jumper Breeding Program.

Esprina’s sire Espri was the 1995 Hanoverian Stallion of the Year and has sired Olympic competitors in both show jumping and dressage.

The first Frisantos’ foals show his charm and expression, and we’re excited to welcome his first foals through Hilltop Farm in the spring of 2020.

His fertility has been excellent ,and our enthusiasm for this young stallion is high.

Contact Hilltop Farm, Inc. at 410-658-9898 or This email address is being protected from spambots. You need JavaScript enabled to view it. to breed to this special stallion.