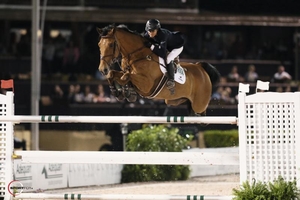 Laura Chapot on Chandon Blue (Photo by Sportfot)There were 45 entries in the grand prix, competing over a course designed by Michel Vaillancourt of Canada.

Returning first in the jump-off was Amy Millar of Canada riding Truman, who set a nice pace with the all-important clear round in 45.65 seconds, which would hold up for second place.

“Everyone in the jump-off had the ability to go quickly,” said Millar, who was an Olympian for Canada in 2016. “I essentially had to go as fast as I felt comfortable and leave the jumps up. I must say, I did think I was going to do one less stride in both of those lines when I made my plan. Then it just wasn’t working out that way. I just rode the plan and left the jumps up, and I feel fortunate that I finished second.”

Millar termed Truman as a “completely for Canada” horse.

“IT'S A PRETTY great story about this horse," said Millar. "I bought him from Eric Lamaze, and Tiffany Foster helped me find the horse when we were all in Europe getting ready for the Rio Olympics. They sold me the horse as a 7-year-old. Then, last year I had a baby, so my dad, Ian Millar, trained the horse for me all last year, got him going around these 1.50m grand prix. I came back this season and have capitalized on everything that everyone has done to help me with the horse.”

Next in was a woman known for her incredible speed in jump-offs.

Laura Chapot and Mary Chapot’s Chandon Blue have had a great run at WEF so far with six top-three finishes, including the two-star grand prix win at WEF 9.

But it was not to be another victory for the pair as they pulled a rail for four faults in 43.07 seconds to finish third.

“It’s hard to say,” said Chapot when asked about the rail that fell. “That was a difficult combination in the first round, and I think coming off a long gallop and then a short turn back to it, he just got over-steadied a little bit and slowed down."

“He maybe jumped a little bit too high and just barely caught that back rail, but I couldn’t be more pleased with him,” said Chapot. “He’s been jumping fantastic the entire time. He’s jumped an awful lot of clear rounds. He’s way exceeded my expectations, and to get another top finish tonight is spectacular.”

Vanessa Mannix of Canada and her own Valentino d’Elte were next in, but eight faults in 45.47 seconds relegated them to fourth place.

With the prime spot of last to go, Derbyshire and Roulette BH not only had to be quick, but a clear round was imperative, and they did just that, going clean  in 44.12 seconds for the win.

“I did actually plan nine strides from jumps two to three in the jump-off and ended up doing eight,” Derbyshire said. “Then I just kept going. I was really lucky in the double at the end. I didn’t have much control by then. Luck was on my side. I had the advantage of watching all three go. I knew if Laura was clear it’d be hard to beat her. It worked out!”

“I’m absolutely ecstatic. I don’t think there’s a better feeling than being able to canter around there,” she said. “To win anything at WEF under the lights with so many people and such a big crowd is always so special. I’ve been in America nine years, and I spent the first seven years watching all of these night classes, so to be able to jump them and be able to win is a dream come true.”