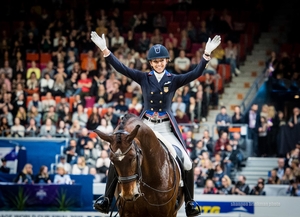 Laura Graves  on Verdades (Photo by Shannon Brinkman)In the dramatic conclusion of the  Dressage World Cup Final, Graves on Verdades won silver in front of an enthusiastic Swedish crowd of more than 11,500.

Graves, who scored 87.179 percent in the Freestyle, gave now three-time World Cup champion Isabel Werth of Germany on Weihegold OLD a run for her money.

Werth scored 88.871 for the gold, and Germany's Helen Langehanenberg on Damsey FRH won bronze on 86.571.

Showing the strength of the American dressage program, all three U.S. combinations broke the top seven with scores over 80 percent.

“I was thrilled. Verdades was so rideable, and I was just really thrilled with his focus and his energy today,” said Graves. “Like Isabel said, the crowd was amazing. They all have this ticker of a live score, and as riders you are going ‘yeah, this feels pretty good.’ You kind of hope that the judges are agreeing with the crowd. You hear the crowd clapping along and you think ‘okay, well at least everyone is enjoying it as much as I am,’ and that’s really special.”

WITH 10 combinations scoring over 80 percent, it was a tight race to the finish, and Graves rode 14th in the order.

“I could not be more thrilled with my performance,” said Graves. “I had a bit of an early draw, and I knew I had to give it everything. We made a couple of adjustments to our program and that really worked in our favor. The music, thanks to Terry Gallo, was spot on. I am so glad we decided to do that; we just love Sweden.”

Kasey Perry-Glass of Wellington, Fla., and Goerklintgaards Dublet were the final U.S. combination in the ring.

Their dynamic freestyle was a crowd favorite, earning them a staccato of applause as they made their final steps and salute to the judges.

Their highly technical and well-executed performance earned them a score of 84.975 percent and fifth place.

“My horse was really good and very honest in everything that he did today. I am just really proud of him,” said Perry-Glass. “It has been an amazing week. All of us U.S. girls did such a great job and we represented the U.S. really well. It was such a pleasure to be here. All the fans were amazing and really welcoming.”

Adrienne Lyle of Wellington, Fla., and Salvino were first down center line for the U.S.

She laid it all on the line for a knowledgeable and engaged audience.

Scoring a personal freestyle best of 81.832 percent, the combination finished in seventh place in their first World Cup Final appearance, Salvino’s first indoor event, and in only their third performance of this particular freestyle test.

“I had a wonderful time," said Lyle. "Scandinavium Arena is by far the most fun venue I have ever ridden in. The crowd is awesome. I came in right after Patrik Kittel, hometown hero, and the crowd erupted and [Salvino] didn’t even put a foot out of place. I think he is enjoying the indoor arena too. It was a really fun crowd to ride to. They were clapping at the end and really getting into the performances today. I am super, super thrilled with him. This is just the start for this horse.” 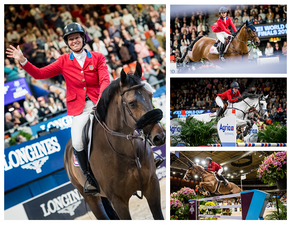 Beezie Madden on Breitling LS (left) and the three winners (Photo by Shannon Brinkman)In a tight race to the finish, the top 10 competitors entered the arena with less than six penalties separating them from the top position.

In the end, it would be Switzerland’s Steve Guerdat and Martin Fuchs going one-two, with Sweden’s Peder Fredricson earning third.

Guerdat and Alamo finished first with two penalties, Fuchs and Clooney 51 second with three penalties, and Fredricson and Catch Me Not S third with five penalties.

For the U.S. combinations. it was Beezie Madden taking the top spot for the Americans, finishing in sixth place.

Madden of Cazenovia, N.Y., and Breitling LS had three very tough rounds, including a jump-off in Final II and two rounds in Final III, to finish the week on 11 penalties.

Santiago Varela’s courses proved to be big and technical, yielding just 32 clears of 118 rides over four rounds and one jump-off.

“I thought everything really basically went well,” said Madden after her last ride. “Breitling felt good coming into the week. I thought he went well all week. We were really close to winning the first round and close to winning the second round. Other people can say that too, but I really thought we were so close to being really, really high up. We are still going to get a decent result out of the Final, even though things didn’t quite go our way. So that is pretty good … I can’t be disappointed really, it was so close to being brilliant. But that is the way it goes, that’s why we do this.”

In their World Cup Final debuts, Jobs of Los Altos Hills, Calif., and Venue d’Fees des Hazalles advanced from the 22nd position in Final II to finish 15th with 30 penalties, while Cruciotti of Elizabeth, Colo., and Hadja van Orshof advanced from 18th to 16th, finishing with 35 penalties.

“First of all, I learned that I can deal with pressure at the end of the day. I can ride confidently and not really succumb to all of the outside factors, and that was huge for me,” said Jobs of her World Cup Final experience. “Jumping these tracks indoors – I’ve never seen anything like this, so to feel like I can do this, is amazing to me.”

“Everything felt great. I thought my horse did really well,” said Cruciotti. “I have never done a championship with this horse before, so I was interested to see how she felt today, if she was tired or a little fatigued. She actually felt great and jumped fantastic. This is a once in a lifetime opportunity and I am just so grateful to be here.”

In her second World Cup Final appearance, Bloomberg of New York, N.Y., and Chameur 137 advanced from 20th in Final II to finish 17th with 41 penalties, just behind their American teammates, Devin Ryan of Long Valley, N.J., and Cooper remained in their 22nd position to finish with 32 penalties prior to the final round of Final III.

“I feel good, Chameur really proved himself,” said Bloomberg. “I think we have learned a lot from each other, but for his first World Cup experience, we have done really well.”

“Cooper has such a big heart and great character,” said Ryan. “He loves his job. He really tried this week, I couldn’t be more pleased with him.”