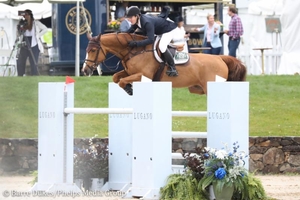 McLain Ward on ContagiousWard won the grand prix for the fourth time at the historic event when he beat a 13-horse jump-off field with a double-clear ride on Beechwood Group's Contagious.

There were 34 international competitors in the first round of the ground prix, riding over  Ireland’s Alan Wade’s track,  and the field was narrowed down to 13 for the jump-off.

Schuyler Riley on Robin De Ponthual was the first to cross the finish line clean in under 40 seconds, breaking the beam at 39.05 seconds.

Three rounds later it was the turn of Olympic and World Equestrian Games gold medalist Ward.

HE WAS efficient but conservative through the first half of the shortened track, as many of the previous riders had issues at the double combination, but then he picked up the pace as he made his way home with Contagious, and he crossed the timers in a blazing 37.68 seconds to take over the top spot.

Great Britain’s Derbyshire gave the win a shot with Roulette BH, galloping down the final line and leaving a stride out to the last oxer, but they were not quite fast enough, finishing in 38.06 seconds to take over second place, while Riley finished third.

Ward took over the ride of the 10-year-old gelding from Reed Kessler last August, and the pair have quickly developed a strong rapport, helping the U.S. Show Jumping Team win the $150,000 Nations Cup at the Winter Equestrian Festival in March.

Ward described Contagious as a sensitive mount, but said that is what makes him so careful.

He is now aiming for the Pan American Games later this year in Lima, Peru.

“We’ve been very excited about Contagious," said Ward. "The Beechwood Group, Lisa and Annie Revers, have been great to support me with this young horse. We’ve been trying to develop him this season, aiming towards the Pan American Games. We had a nice WEF, he did very well in the Nations Cup there. We’ve been just trying to build him up, and he’s been knocking on the door for a big win. I kept telling Lisa that he would win a great grand prix soon enough. We’re really excited that it came together and today was the day.”

“I’m lucky to have great people behind me, and the ability to have a great string of horses," said Ward. "We’re always developing that and looking for opportunities to add to it. I’m lucky to have Azur and Clinta, but I think Contagious has the potential to be that kind of horse, he’s just a bit greener. Personality-wise, he’s a sensitive horse, a little bit afraid of his own shadow. I would say he’s a bit of a wimp to be honest, but that’s what makes him careful. You have to hold his hand from time to time, but he delivers when it counts.”

“Contagious is a pretty quick horse, and I gave a little time at the combination because that seemed to be a trouble spot in the jump-off," said Ward. "It was a difficult rollback to the last line, which I thought was a bending eight, and I thought I could cut in on the skinny. Alan narrowed up on the oxer, and I thought it was a good opportunity, and the horse responded beautifully. We have good ground here and a great course builder and that produces great show jumping.”

“I was saying yesterday and today that I have very fond memories here," said Ward. "I used to drive down here with my father in the old days. We would have a great six and a half hour drive together ,and we stopped for lunch and spent some time together. My father and I would compete in the grand prix, and sometimes it would be a nice drive home and sometimes it wouldn’t be a nice drive home. I was a bit nostalgic when we got off of the exit in Winchester, because that’s where we would stay back in the day. Great compliments to all of the people involved here, the sponsors, but also the volunteers, the staff, everybody who has made great efforts in the last several years to bring this event, for show jumpers, up to a real top international level. Hats off to all of you, it’s phenomenal. For me to be able to come back here with my family — my god-daughter was champion in the hunters this week, my daughter is here, my wife — it’s a great way to end the week ,and I hope we have more events like this in our country, and that this one keeps getting better and better as it has done in the last several years.”

“I just started to get to know Robin in December, because he had a career with another rider for quite some time," said Riley. "As we all know, at the top level, it’s a real partnership, and you want to have a relationship with the horse before you put your foot on the gas. Last week at Devon he was clear in the grand prix, and we had a clear round in the jump-off. I really feel like I now have clicked with him and we have a really good partnership. He’s been feeling amazing, he’s jumping great, the courses have been fantastic and he has such a nice, big stride that the jump-off today really allowed me to use that to my advantage. I felt like it was time to take the chance and make some tight turns.”